India’s startup ecosystem took a long stride towards maturity this year, as several big-ticket acquisitions and funding rounds created market leaders across segments and also provided investment and exit opportunities to a number of investors.

Leading the startup narrative this year—both in terms of fundraising and growth—were consumer-focussed companies across segments from e-commerce and ride-hailing to food delivery and ed-tech. The year also saw the emergence of many unicorns.

Moreover, several segments are showing signs of consolidation. Today, it’s clearly a two-player game between Flipkart and Amazon in e-commerce and Uber and Ola in ride-hailing. OYO is eons ahead of rivals in the budget hotels space and BigBasket leads in online grocery while food delivery has four well-funded players—Swiggy, Zomato, Foodpanda and Uber Eats.

Meanwhile, a slew of acquisitions from leading consumer internet brands such as Paytm, Myntra, OYO, Swiggy and Flipkart—and the resultant exits for investors this year—have helped make startup investing a promising asset class. The Walmart-Flipkart deal alone reportedly created hundreds of millionaires, many of whom may pump the capital into startups as angel investors.

Companies like Ola, OYO and online recruitment portal HackerEarth have expanded their operations abroad this year while others such as Zomato, Practo and Wittyfeed have already established their presence in multiple countries.

Ending a two-year lull, funding into startups surged to a new record this year, with 743 deals being sealed with a total deal value amounting to $6 billion (until November). In comparison, 2017 saw 1,046 deals being signed, accounting for a total deal value of $4.8 billion, according to VCCEdge, the data research platform of News Corp VCCircle. These numbers exclude mergers and acquisitions, including the mammoth $16-billion Flipkart-Walmart deal. 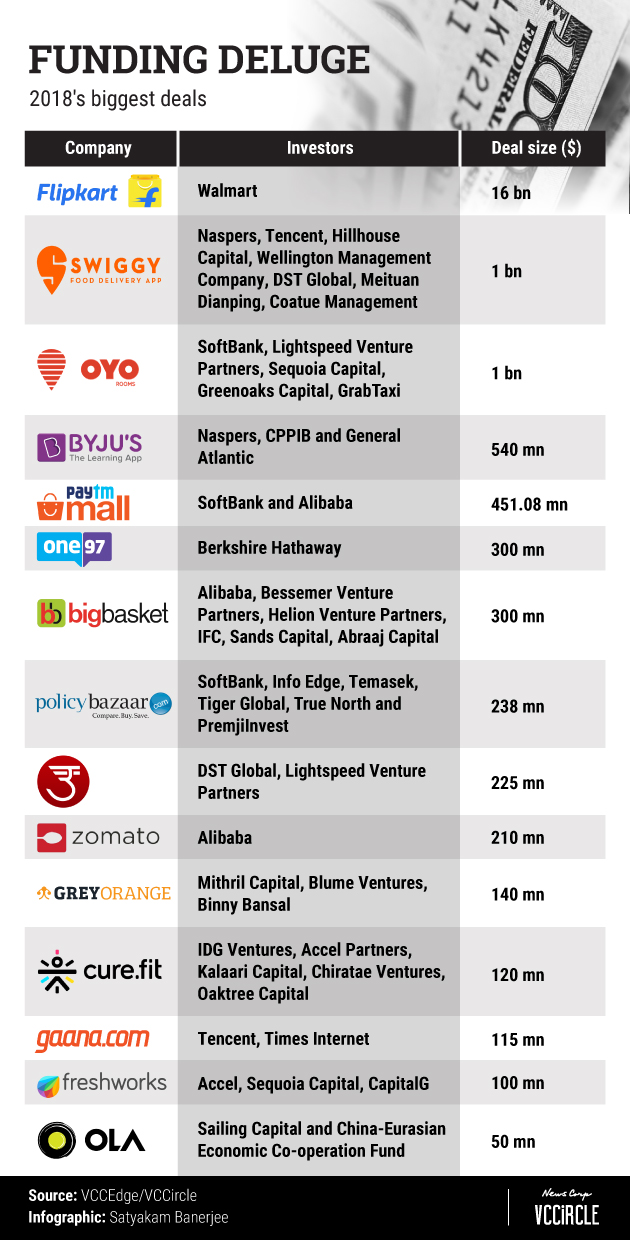 While in value terms, the lion’s share of the capital has gone into the consumer internet sector, investors diversified their bets on technology product, business-to-business, fintech and more segments.

The year also saw a large number of specialist technology venture capital firms invest in segments such as artificial intelligence, blockchain and Internet of Things. Early-stage funds such as pi Ventures, which focuses on emerging technologies such as artificial intelligence; Ideaspring Capital, which specialises in deep technology-focussed companies; and Endiya Partners, which invests in intellectual property-led product startups, are opening up a new frontier in technology innovation. This trend is likely to gradually lead to more investments into technology and product in an otherwise consumer-focussed industry.

This year, investors let loose their purse strings, thus creating several unicorns, an industry term referring to companies valued at more than $1 billion. According to a recent NASSCOM-Zinnov report, titled The Indian Startup Ecosystem 2018, the year saw eight unicorns, the highest ever, being created. The time taken for Indian startups to become unicorns has come down drastically, the report said. The arrival of new companies to this club this year takes the total count of Indian unicorns to 18.

Japanese internet conglomerate SoftBank Group Corp, which has become a prominent investor in India’s tech startup scene, this year led rounds in PolicyBazaar, OYO, and Paytm Mall which pushed them into the unicorn club.

SoftBank is reportedly also in talks with several companies including Zomato for potential investments. The investment behemoth has pumped in about $5 billion in India from its $100-billion Vision Fund over the past 18 months, a good portion of which was completed this year. It has previously backed Ola, Flipkart, e-commerce firm Snapdeal, online grocer Grofers, mobile advertising firm InMobi and instant messaging app Hike.

SoftBank has splurged and indulged in ‘ambush’ investments, giving it unprecedented clout over portfolio startups, resulting in the Masayoshi Son-led firm to influence significant decisions in its investee companies. For instance, it made a serious attempt to orchestrate a merger between e-tailers Flipkart and Snapdeal in the past.

To strengthen its ties in India, the company hired Sumer Juneja, a top executive from multi-stage venture capital and growth equity investment firm Norwest Venture Partners, as the country head. It also recently roped in former Facebook India head Kirthiga Reddy to be a part of its Vision Fund.

Rise of the dragon

Indian startups have also seen considerable interest from a number of Chinese investors this year. Firms like Ant Financial, Shunwei Capital, Tencent, Didi Chuxing, Plum Venture, Fenqile and Xiaomi have made ambitious bets in the country.

Data from VCCEdge show that Chinese investors have infused about $1.1 billion in India across 34 deals this year.

The Chinese have made investments in both the early- and late-stage ventures. Going forward, these investors will only strengthen their foothold in India’s startup landscape.

While the country’s startups made headlines for signing large cheques this year, the sector also witnessed a number of controversies.

One of the most prominent was the abrupt exit of Flipkart co-founder Binny Bansal, who resigned from the e-commerce company as group chief executive in November following an independent probe into allegations of ‘serious personal misconduct’. He denied the allegations.

Vijay Shekhar Sharma, founder and chief executive of One97 Communications Ltd, was involved in a bizarre controversy when his secretary and three other accomplices were booked for data theft and extortion. The alleged blackmailers tried to extort Rs 20 crore from Sharma and his brother Ajay Shekhar Sharma and threatened to make the data public and defame Sharma if they failed to pay the ransom.

Mahesh Murthy, a prominent angel investor and co-founder of venture capital firm Seedfund, was in news for allegations of sexual harassment. He was arrested in February and released on bail soon after. Later in March, a second case of sexual harassment was filed against Murthy. A college dropout who went on to become an outspoken and influential figure in India’s startup ecosystem, Murthy had faced a string of sexual harassment allegations in 2017 as well. In all cases, he has denied the allegations.