India's nascent but fast-growing fintech sector recorded another year of success in terms of funding and entrepreneurial activity, but 2018 will also be remembered for a number of policy changes that will impact the way companies in the segment do business for years.

The sector was witness to several reforms by the Reserve Bank of India: Guidelines on the maximum merchant discount rate that can be levied on debit card transactions, stricter norms for mobile wallets, allowing interoperability through the Unified Payments Interface (UPI) as well as issuing rules for peer-to-peer lending platforms.

According to Sangram Singh, chief executive of mobile wallet firm Freecharge, customer adoption has been one of the most important factors that led to multiple players entering the fintech sector, thereby expanding the scope of the financial ecosystem. Consequently, internet and smartphone penetration will continue to be a significant driver for growth in the fintech domain.

“There is a huge potential in lending and investment segments for financial services penetration, considering this is still an under-served space. Evolving customer behaviour and increase in demand by end-users have impelled players to undergo rapid digital transformation and focus on delivery of new customer-focused technology efficiently,” Singh added.

Notwithstanding the positive macro-economic factors, the fintech sector recorded a decline in the total funding amount and the number of deals.

According to provisional data available with VCCEdge, the research arm of VCCircle, investors ploughed around $683 million into this sector this year, less than the $1.83 billion last year. The number of deals fell to 65 from 75.

However, last year's numbers are skewed because of the $1.4 billion secured by Paytm. Excluding that Paytm deal, the fintech sector secured raised more money with fewer deals.

Also, it is quite likely that some deals have not been disclosed. Besides, the cut-off date for the deal data is 15 December. Hence, the actual funding numbers could be even more. 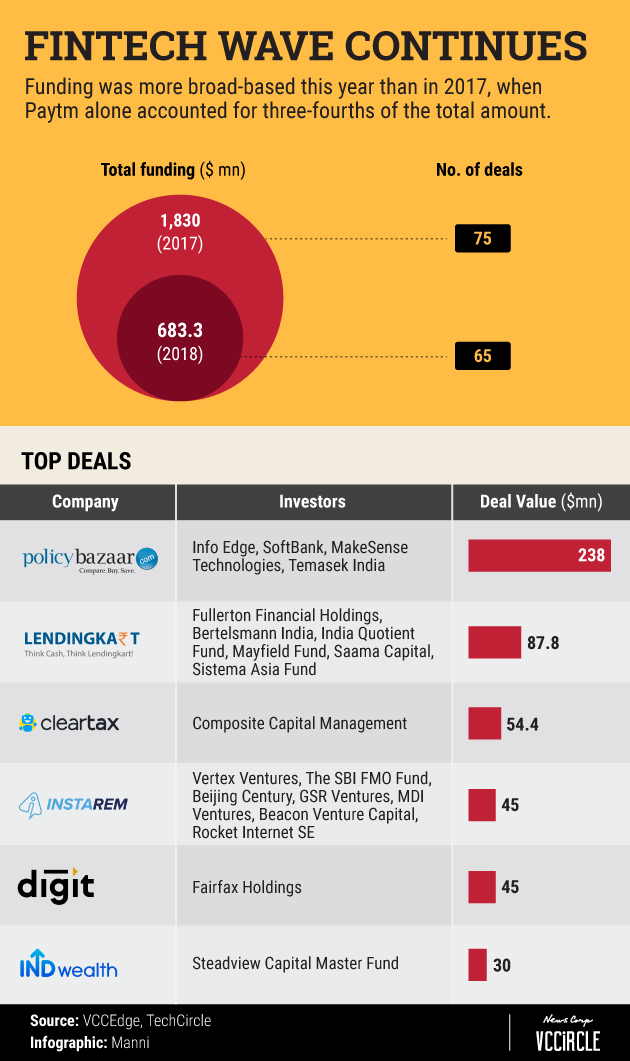 Some of the most active investors in terms of the number of deals include Kae Capital, India Quotient, Matrix Partners, M&S Partners and Blume Ventures. Some of the largest deals by ticket size during the year include the $238 million round secured by PolicyBazaar, $87 million by Lendingkart, $54 million by ClearTax, $45 million each by Digit Infoworks Services Pvt. Ltd and InstaReM, and $30 million by INDwealth.

Industry observers, by and large, agree that funding is is not a problem for this sector. The investment thesis is, however, restricted and the holistic picture is missing.

“The challenge is that startups build a very pointed piece of solution, but when that solution is implemented, it becomes difficult to accept it. So the adaptability of enterprise in fintech is a big challenge,” said Manish Jain, partner for digital and fintech at audit firm KPMG.

According to industry experts, the Indian fintech sector is about a decade old and started with the likes of PolicyBazaar and BankBazaar being the early entrants in offering Indian customers a digital channel for financial services. However, the sector attained maturity over the last five years, with around 80% of the fintech companies having formed during the period.

India, like any other evolving market, is exhibiting a similar trend as far as the proposition and impact of the fintech sector goes, industry executives say.

Over the past few years, fintech companies have played an instrumental part in adding value to the customer experience. A lot of these companies have been able to extend the reach and umbrella of the not-so-complex products in retail banking, which include credit cards, loans and insurance.

Besides the advent of UPI, the mushrooming of online lenders has provided a much-needed boost to the payments and lending sector. The country is also being seen as a test bed for new-age fintech innovations by companies such as Amazon, which have developed many India-centric solutions.

Some of the sub-sectors disrupted by recent tech innovations include digital payments, online lending and the ones that are beginning to see the offshoots of digital disruption include insurance-tech and blockchain.

According to Vinod Murali, managing partner at Alteria Capital Advisors, fintech has multiple segments that have different drivers such as credit, payments and distribution of different products.

While 2016 was pretty much the year of digital payments, 2017 belonged to online lending players.

VCCEdge data show 2018 online lending and personal finance platforms signed the most number of deals at 43 (45 deals in 2017) and raised a total of $565 million.

In the personal loan segment, credit scoring and credit assessment have undergone a big change with the adoption of alternative assessment parameters and new-age technologies like artificial intelligence and machine learning and re-inforcement learning (RL).

Thanks to the changes, the processing time has shortened as companines evaluate creditworthiness on parameters that include social media presence and do not ask for bank statements. However, these changes haven't taken place in the processing of business loans.

“In comparison to traditional scorecards approach, RL provides a robust and faster solution. This doesn’t require any strategy shift as you have to just plug out the traditional methods and plug in the RL- and AI-based solutions,” Abhishek Agarwal, co-founder and CEO of alternative credit scoring and assessment platform CreditVidya, told TechCircle.

Given the lower cost and shorter turnaround times, many lenders are building newer products to provide short-term loans to the bottom-of-the-pyramid segment, Agarwal added.

UPI, which has been one of the most-defining moments of the Indian fintech history in recent times, has brought about a spurt in the growth of payments platforms, with the influx of global majors like Google, WhatsApp and Xiaomi, which is testing the beta version of its UPI-based payments platform.

The sector does have its fair share of challenges that include scaling up, burn rate, and inherent defects and flaws in some models like digital payments and online lending.

“As and when new regulations come in, business models will keep changing. If digital lending comes into consent-based architecture, the institutions have to then change accordingly, which is again a challenge,” Jain added.

According to Murali, in the online lending platforms, which can broadly be classified into aggregation and balance sheet, the perception is the challenge.

“The traditional NBFCs are suddenly choking on their credit lines. So the new entities would also face difficulty in raising capital on the debt side because bank cap is shut for now. So there’s going to be some squeeze for some time at least. In credit, a lot depends on trust and perception, which are very negative right now for NBFCs,” Murali said.

While there has largely been a positive push in reforms, the sector also has seen some controversial rulings. To give a perspective, the likes of PolicyBazaar and BankBazaar did not have the support of the Insurance Regulatory and Development Authority during their initial years, says Gartner's Sachdev.

Industry experts feel that the Indian financial services sector is one of the most regulated in the world. However, the regulators have a hazy understanding of technology-led innovation in this sector, say experts. This is perhaps one reason why the regulators are still not able to frame encompassing guidelines and regulations for the sector.

“Insurance firms are more risk-averse while banks have that playground to come up with new innovations. Going forward, I think there will be explicit regulations around data collection, data analysis and the kind of data the customer would like to share with the company,” said Gartner’s Sachdev.

During the year, the sector also saw developments that were seen as setbacks by the fintech companies.

In September, the Supreme Court upheld the constitutional validity of the Aadhaar Act but restricted the use of Aadhaar by private parties including banks, telecom operators and fintech companies, apart from those providing Aadhaar-based verification services for eKYC.

However, earlier this month, the Union Cabinet reportedly okayed changes to laws in a bid to allow optional Aadhaar-based KYC.
In April, the Reserve Bank of India mandated that all payment system operators will be required to store payment-related data only in India within six months.

This deterred the launch of a payments platform by Apple while Facebook-owned WhatsApp, which had rolled out the beta version of its payments feature in February, has been in a state of suspension as National Payments Corporation of India sought clarity from the company on its compliance with the data-storage norms.

While the funding outlook is expected to be the same over the next few years, certain areas are likely to see more disruption and receive more investor attention, according to industry experts. These include insurance tech and blockchain-based payment solutions.

Some of the biggest deals this year were sealed by insurance tech companies PolicyBazaar and Digit. The next wave of innovations could likely come from this sector, particularly non-life and health insurance while life insurance will probably be a little late to the party.

“Retail banking, non-life insurance and health insurance are some areas that can see a lot of disruption and innovation. Likewise, if telemedicine and virtual medicine take off, the next wave is expected to happen in healthcare insurance with a major emphasis on population management,” said Gartner’s Sachdev.

Blockchain-based payment solutions is another area that holds a lot of promise, according to experts. Already, organisations like ICICI Bank and Infosys have introduced or explored blockchain-based financial solutions, as per multiple media reports.

“The challenge here is that this is a point-based solution and it will just be between two parties. The robustness of this tech comes to the fore only when multiple parties are involved or a third party comes in,” added Sachdev.