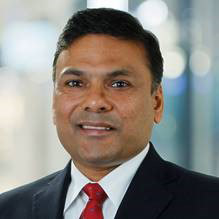 News of the development comes more than six months after the US-headquartered cab aggregator announced the appointment of Pradeep Parameswaran in June as its new president for India and South Asia. Parameswaran had joined Uber in January last year.

In May 2018, VCCircle had announced that Uber India and South Asia chief Amit Jain will head the ride-hailing app’s operations in the Asia-Pacific, with his promotion to the post of general manager for the region. The firm had said the elevation of the Indian leadership re-iterated the strategic importance of India and South Asia.

Parameswaran said in a statement, “Vaish has a proven record of creating and building organisations that leave a legacy and has worked hard to create an inclusive, global culture within organisations over the years. We are confident that Vaish will play a pivotal role in writing the next chapter in the company’s growth journey.”

Vaish brings to table 25 years of experience in the business process outsourcing industry and was co-founder and chief executive of Daksh e-services, which was acquired by IBM in 2004, its first-ever acquisition in India. Vaish was responsible for growing the geographic footprint of the company across Latin America, Europe and Asia.

India accounts for 11% of global rides for Uber, according to a communication shared by Parameswaran with his employees For the financial year 2017-18, Uber India Technologies saw profit jump from Rs 3.22 lakh the previous year to Rs 19.6 lakh, according to reports.