The underlying theme of India’s decision to revise the rules for foreign direct investment (FDI) in e-commerce was to force market leaders Amazon India and Walmart-owned Flipkart to be nothing more than platforms where buyers can meet sellers.

Under the tweaked norms, companies cannot sell via firms in which they have an equity interest and are not allowed to exercise control over inventory. With the e-commerce giants heavily reliant on this modus operandi, they now face the prospect of having to overhaul their business structures.

While Flipkart and Amazon have both put on brave faces about the new e-commerce norms, industry experts have been ringing alarm bells.

For instance, ratings agency CRISIL has estimated that the new rules could result in the e-tailing industry taking a hit of Rs 35,000-40,000 crore or 35-40% of their sales.

As Flipkart and Amazon sharpen their focus on their roles as marketplaces, it’s worth examining where things stand with regard to the financial performance of their consumer-facing entities on which they may now grow increasingly reliant.

Flipkart Internet Pvt. Ltd and Amazon Seller Services Pvt. Ltd both grew their revenues significantly in the financial year 2017-18 but cash burn remained high as a discount-driven strategy continued to dominate the space.

Amazon took pole position in terms of operating revenues while clocking 58% growth compared to Flipkart’s 48% rise in net sales. These earnings were primarily generated by way of commissions from sellers and services related to collection, storage and logistics.

In comparison, Cloudtail and Appario, step-down down subsidiaries and two of the major sellers on Amazon before the recent FDI rules were enforced, posted operational revenues of Rs 7,148.76 crore and Rs 755 crore respectively in 2017-18. However, their contribution to the revenues of Amazon's marketplace entity could not be ascertained.

We also took into consideration Alibaba-backed Paytm Mall, the newest major entrant in the e-commerce race, for whom 2017-18 marked its first full year of operations.

Paytm Mall was far behind as its operating revenues amounted to just about a quarter of second-placed Flipkart. To be fair, it was launched only in 2016 while Flipkart came into being in 2007 and Amazon entered India in 2013.

For Amazon, its higher revenues came on the back of higher gross expenditure and cash burn.

The Seattle-headquartered giant’s net losses were six times more than Flipkart as it outspent its fiercest rival by a long way in all departments. In fact, Flipkart managed to narrow its losses by around a third as compared to the previous fiscal. Walmart’s acquisition of Flipkart was announced and formalised after the period under review.

Meanwhile, Paytm Mall’s cashback-led discounting strategy appeared to take its toll with expenses and net losses both higher than Flipkart despite garnering much lower revenue.

Recent reports have suggested that Paytm’s e-commerce division has given second thoughts to this approach and has trained its guns instead on its wholesale B2B operations. 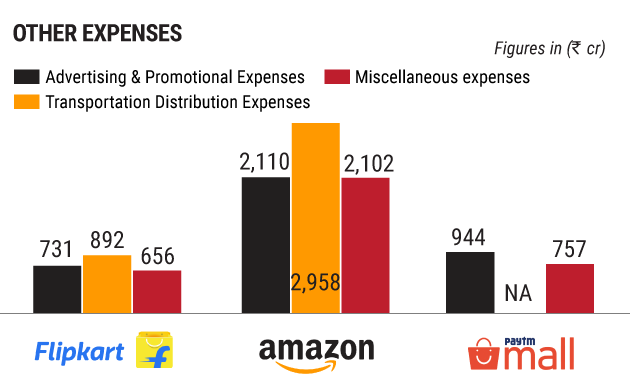 Expenditure and cash burn will likely remain pain points especially for Flipkart and Amazon as experts say the duo will have to increase operational costs in the wake of the new FDI regulations.

But it is the impact on profitability that will be a bigger concern.

In a brokerage report put out on Monday, investment banking giant Morgan Stanley said that Walmart may part ways with Flipkart if it does not see a road to profitability in an Indian e-commerce market that is becoming “more complicated”.

The ostensible trigger for the recent regulatory tweaks was to create a level playing field for homegrown firms. Snapdeal and ShopClues are the most prominent horizontal players on that count.

The Gurugram-based companies share a common goal of staying relevant in a space that is dominated by foreign-funded behemoths.

After a failed merger with Flipkart and its inability to raise follow-on funding, SoftBank-backed Snapdeal has switched to a pure-play e-commerce marketplace model.

Once a unicorn, it has embarked on what it calls Snapdeal 2.0, a strategy which entails operational efficiencies, low or zero cash burn, far less flab in terms of employee strength and a flowing funding tap for attempts at a turnaround.

ShopClues, which was launched in 2011, has always had a clear focus on tapping the largely neglected Tier-III and Tier-IV markets. Snapdeal has also adopted a similar approach. 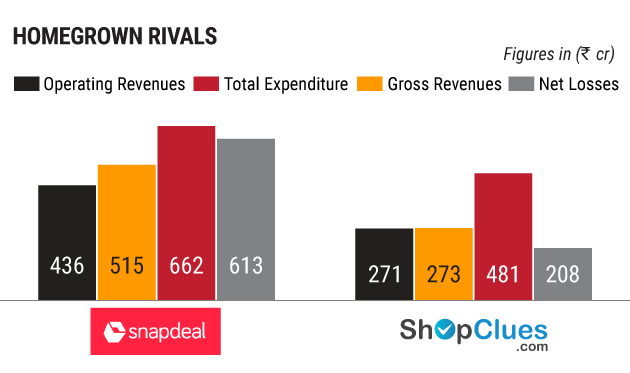 Snapdeal clocked higher operational revenues among the two for the year ended March 31, 2018. However, Snapdeal’s revenues more than halved as compared to the previous fiscal.

However, it must be noted that Snapdeal’s net loss pre-tax and before adding exceptional items was significantly lower.

Both companies have been vocal supporters of the new e-commerce norms as they feel it will help them narrow the gap with their foreign-owned bigger rivals.