The Indian government on Tuesday sought to relax the provisions of  the ‘angel tax’ that ends up taxing startups for raising angel funding, but the devil in the fine print suggests a significant chunk of ventures would be ineligible owing to the riders associated for exemptions.

In a notification issued on Tuesday, the government broadened the definition for startups that are exempt from paying angel tax. More significantly, it raised the limit of funding that would be exempt from Rs 10 crore to Rs 25 crore.

Typically, angel funding rounds go up to $2-3 million (Rs 14-21 crore), after which venture capital investors come into the picture. With the higher exemption limit, the bulk of the angel investment would become eligible for exemption from the tax, seen as draconian by the ecosystem.

However, startups will still have to contend with bureaucracy to become eligible. They will need to file a declaration with the Department for Promotion of Industry and Internal Trade (DPIIT) -- earlier known as the Department of Industrial Policy & Promotion -- which will then be transmitted to the Central Board of Direct Taxes.

S Vasudevan, partner at law firm Lakshmikumaran & Sridharan Attorneys, said that the term ‘securities’ is broad enough to include mutual funds, a common instrument of investment by startups. He added, however, that this clause will require further clarifications.

Secondly, startups looking to get exemptions cannot make capital contributions to ‘any entity’. This negates the scope for exemption for startups that have a subsidiary or another associated firm. Many firms have overseas arms or have associated ventures owing to regulations, especially in the fintech space. 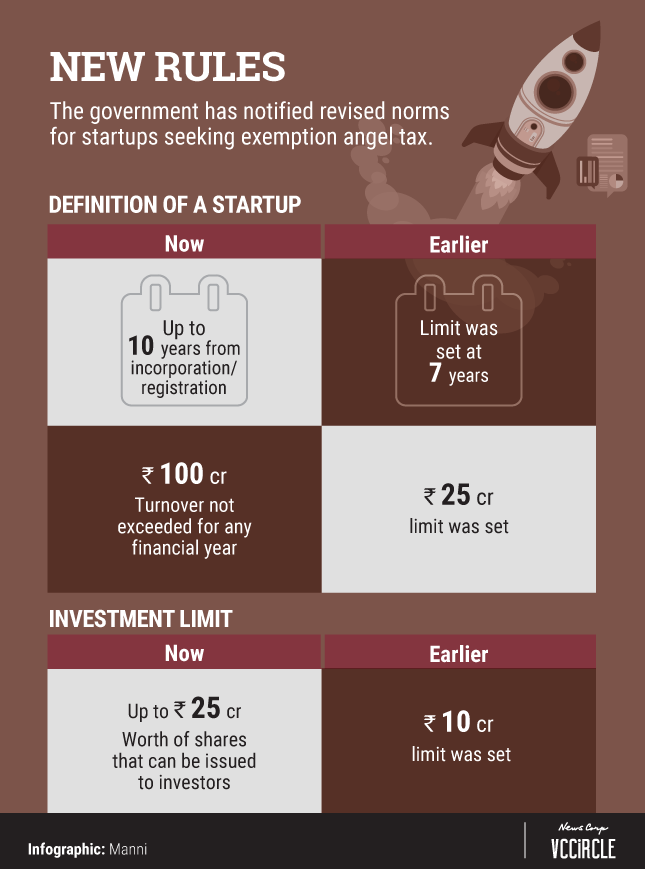 The provisions under Section 56(2) (viib) of Income Tax Act are commonly referred to as angel tax. They treat early-stage investments in a startup as ‘income from other sources’, taxing them on par with corporate taxes at 30%.

As per the broadened definition for the purpose of exemption, a company will be considered to be a startup till ten years from the date of incorporation, as opposed to seven years previously.

Also, the notification says that a company will continue to be a defined as a startup if its annual turnover since its incorporation/registration has not exceeded Rs 100 crore -- four times the previous limit of Rs 25 crore.

There has been no change in the definition of angel investors, who are required to show a minimum net worth of Rs 2 crore and should have an annual income of Rs 25 lakh while filing tax returns in the last three years.

The notification, however, exempts investments from non-residents, Category I Alternative Investment Funds registered with the markets regulator, and listed companies with a net worth of Rs 100 crore or turnover of at least Rs 250 crore provided that its shares are frequently traded as per SEBI (Substantial Acquisition of Shares and Takeovers) Regulations, 2011.

The latest development comes a month after the government had sought to speed up the process of granting exemptions.

“What we asked for in the meeting with DPIIT was to let startups apply for exemption but approval should be de facto. The current notification allows for the same for startups which meet these criteria,” said Sreejith Moolayil, co-founder of packaged food startups TrueElements, who was a part of the discussions with DPIIT on the new set of notifications.

“The stated exemptions may provide much-needed relief to the relatively larger-sized startups who may have been required to pay tax on premiums received on share subscription,” said Vasudevan of Lakshmikumaran & Sridharan Attorneys.

He added, however, that it may be a while before startups will be able to avail of the newly-announced benefits as many of them required amendments in the law.

“The startups will continue to carry the onus to establish the genuineness of the source of the investment made by the investors, failing which the sums received on share application can be taxed by the department,” Vasudevan added.

Last April, the DIPP had issued a notification easing some of the norms for angel tax.

However, in December, more than 80 startups were hit with notices from the Central Bureau of Direct Taxes (CBDT) in relation to angel rounds raised a few years ago.

Following the CBDT notices, industry bodies rallied together to seek exemption from the angel tax.

“This notification is simpler but does not address the issue of coercive action. It is better to freeze the shareholding of the promoter, instead of freezing the bank accounts,” said Manish Kumar, CEO of private market platform Grex and real estate ecommerce platform RealX. He also participated in the discussions with the DPIIT.