The first week of June saw a 76% rise in startup deal-making activity, with the transaction value reaching about $162 million from $92 million a week before, though the number of deals did slow down to 14 from 20. 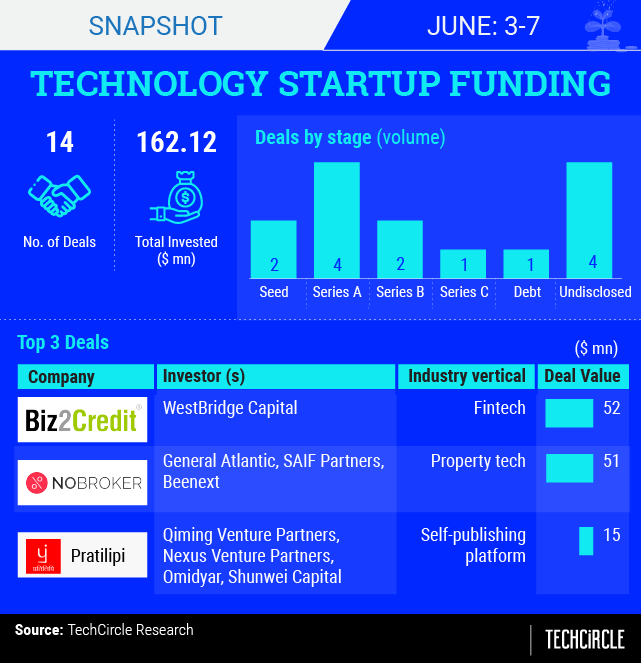 Existing investors SAIF Partners and Beenext also took part in the funding round, which took the total funding the firm has raised so far to $71 million.

The fresh round of funding comes after the firm had raised $17 million in a Series C round in two tranches in 2016.

Pratilipi, owned and run by Nasadiya Technologies Pvt. Ltd, will use the fresh capital to improve its technological infrastructure, including its recommendation and personalisation engines. The company is also aiming to increase the number of writers on its platform.

Founded in 2015 by Ranjeet Pratap Singh, Sahradayi Modi, Rahul Ranjan, Sankaranarayanan Devarajan and Prashant Gupta, Pratilipi acts like a discovery and reading platform for readers, allowing writers to e-publish their poems, stories and other literary works.

Other financial backers including Mayfield India, Kalaari Capital and Blume Ventures also participated in this round.

Milkbasket, operated by Aaidea Solutions Pvt. Ltd, said it will use the funding for geographical expansion, hiring professionals, and research and development.

The startup was founded in 2015 by Anant Goel, Ashish Goel, Anurag Jain and Yatish Talvadia. Unlike Bigbasket, Grofers, Amazon and Flipkart -- the big players in the online grocery delivery market -- Milkbasket positions itself as the online version of local mom-and-pop grocery stores, only with more stock-keeping units.

Today, TechCircle reported that more than one month after Flipkart co-founder Sachin Bansal’s BAC Acquisitions committed to loan Rs 20 crore ($2.86 million then) to Milkbasket, both have mutually decided not to proceed with the deal, without citing a reason for the move.

Fintech on the rise

Biz2Credit will use the fresh funding to expand its marketplace lending business as well as support the expansion of Biz2X – its digital lending platform for banks and financial institutions – through partnerships with global entities.

The firm, whose Series A round was led by Nexus Venture Partners, was founded in 2007 by Rohit Arora and Ramit Arora.

Avail Finance will use the funds to foray into neo-banking.

Employee performance management platform Dockabl raised $1.26 million (around Rs 8.7 crore) in a pre-Series A funding round from Innov8 founder Ritesh Malik, others.

Chakr Innovation Pvt. Ltd, which is building a suite of products to reduce air pollution, raised Rs 19 crore ($2.87 million) in its Series A round of funding led by IAN Fund, the debut fund of the Indian Angel Network.

Digital documentation platform Leegality raised an undisclosed sum of money in a funding round led by Mumbai Angels Network.

Personal care brand mCaffeine raised $2 million (Rs 13.8 crore) in a Series A round of funding from a clutch of investors led by RP-SG Ventures.

Cityfurnish, an online rental marketplace for furniture and consumer appliances, raised $5 million in a Series A round of funding from a clutch of investors including Gmail creator Paul Buchheit and YouTube co-founder Steve Chen.

There were about four consolidation-related deals this week. While some of them were buyouts, a couple turned out to be acqui-hires.

Acko aims to expand the base of its auto ecosystem with this acquisition, whose value it did not disclose. VLer’s capabilities and know-how in the online car-retailing space will be leveraged by Acko to improve customer experience throughout the lifecycle of car purchase and usage.

US digital marketer IntellaSphere Inc. agreed in principle to buy Mumbai-based Edgytal Digital Marketing Pvt. Ltd, which operates in the same segment. The two companies did not disclose the financial details of the transaction.

Edgytal has a presence in India, the US and Canada, while IntellaSphere operates offices in the US and India. The acquisition will see IntellaSphere’s India operations merge with Edgytal India. The merged entity will be led by Edgytal chief executive Kirti Bhargava. Edgytal managing director Aditya Mehta will join IntellaSphere US as its vice-president of business development.