Dealmaking activity was relatively muted this week as compared to the previous fortnight, when some big-ticket deals and a flurry of early-stage investments pushed up deal value and volume respectively.

In all, 12 startups raised $46.15 million in fresh capital over the past five days. In the first week of June, funding worth $162 million was spread across 14 startups.

To be sure, this week’s deal value could well be higher as the financial specifics of the standout transaction of the week -- Facebook’s investment in social commerce platform Meesho -- were not disclosed.

Apart from social commerce, the other sectors in focus were software-as-a-service (SaaS), industrial Internet of Things (IIoT) and business-to-business (B2B) e-commerce. 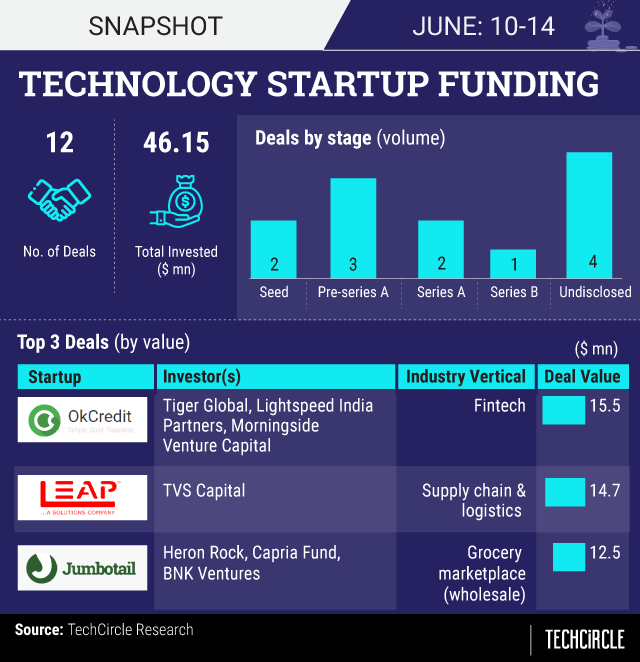 Here’s a summary of the top deals:

While the value of the deal was not disclosed, multiple media reports pegged the transaction at $25 million.

Meesho said that the capital will help it enable independent entrepreneurs to build businesses and grow their customer base via social channels.

Facebook had previously bought out Bengaluru-based Little Eye Labs, which built a platform for developers, in 2014.

Jumbotail Technologies Pvt. Ltd, which runs an online marketplace for food and groceries targeted at wholesale buyers, raised Rs 90 crore ($12.5 million) in its Series B funding round led by Heron Rock, an omni-stage venture fund with offices in Toronto and San Francisco.

Jumbotail will use the fresh capital to boost its artificial intelligence-driven supply chain, forward integration of its platform with point-of-sale (PoS) teams, team expansion and to establish new clients in the fast-moving consumer goods (FMCG) segment.

Tiger Global’s dealmaking spree in India continued with yet another bet on a B2B startup. This time, it was the lead investor as OkCredit, which helps merchants keep track of payments and credit records via a mobile application, raised $15.5 million (Rs 107.73 crore) in a Series A funding round.

Morningside Venture Capital, Lightspeed India Partners, Venture Highway and Y Combinator were among the other investors who participated in the round.

The company will use the fresh capital to expand its merchant base as well as create and staff teams in verticals such as product, technology and digital banking.

Bolo, a video-based knowledge-sharing platform which offers content in Hindi, raised Rs 3 crore in a seed funding round led by Nexus Venture Partners.

Vowelor, a startup that provides a real-time interactive platform for book lovers, raised Rs 1 crore ($140,000) in a pre-Series A funding round led by angel investor Sanjeev Juneja.

Arzooo, a business-to-business (B2B) e-commerce platform floated by two former Flipkart executives, raised $1 million (around Rs 6.95 crore) in a pre-Series A round of funding.

As part of the deal, the financial details of which were not disclosed, AirCTO’s team will join Go-Jek to help recruit coding talent for scaling up the Indonesian firm’s super app.