Funding Roundup: Investments cross $400 million on the back of growth deals

Growth stage funding took center-stage again this week which saw a total of 21 deals worth more than $400 million being concluded. In all, funding activity in India’s technology startup market was spread across 18 sectors from enterprise technology to ecommerce to fintech to urban mobility.

Four growth deals -- typically investments made after the Series C stage -- accounted for nearly 90% of the total funding raised during the week. However, in terms of number of deals, the angel and seed stages topped the charts, accounting for 7 of the 21 deals struck during the week.

Here’s a look at the highlights from dealmaking activity this week.

After close to four months of speculation, Ebay’s formally announced that its was picking up a 5.5% stake in Paytm’s ecommerce arm. While the San Jose, California-based ecommerce firm did not disclose the value of the transaction, multiple media reports put the ticket size at $150 million investment.

The investment comes along with a commercial agreement. eBay will bring its global inventory on to Paytm Mall’s platform. While the deal marks eBay’s re-entry into the Indian ecommerce market, it also keeps Paytm Mall in the play in a market that is currently dominated by Walmart-owned Flipkart and Seattle-based Amazon. 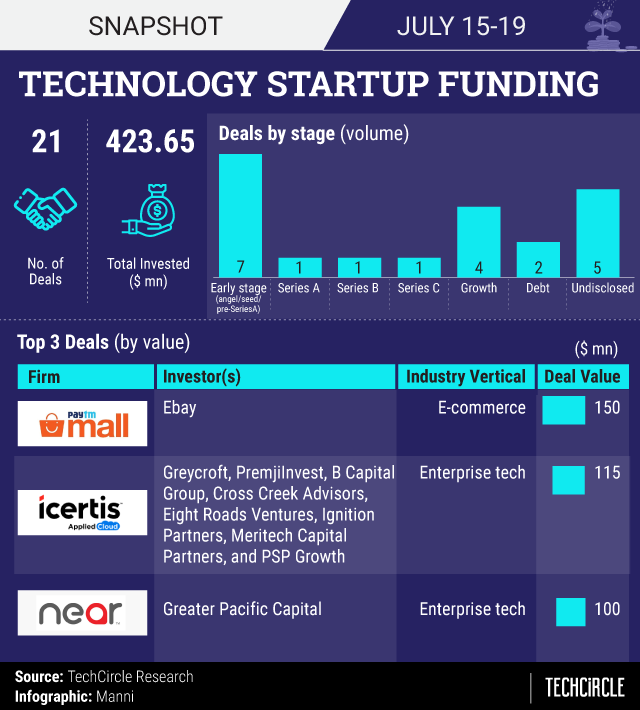 The enterprise technology segment saw two significant deals where the ticket size either touched or breached the $100 million mark.

Singapore-based data analytics startup Near raised $100 million (Rs 688.39 crore when reported) from  London-based private equity firm Greater Pacific Capital (GPC). While the startup has a team of engineers in Bengaluru, it is yet to launch its services in India. Founded in 2012 by Indian origin entrepreneur Anil Mathews, Near offers  data-driven end-to-end marketing automation solutions through a suite of SaaS products.

Mobile games developer Nazara Technologies Ltd made about three investments in the form of new investments and hiking stakes in existing investee companies. The move was part of its efforts to consolidate its foothold in the mobile gaming space. It invested $5.21 million (Rs 35.76 crore when reported) and $1.02 million respectively in digital multi-sports content platform Sportskeeda and sports trivia and quiz platform Qunami.

Online grocery platform Grofers raised another $10 million in what appears to be a top-up to its latest $200 million plus funding round. UAE-based Abu Dhabi Capital Group became the newest investor to get on board at Grofers.

Co-working space provider Awfis Space Solutions Pvt Ltd raised $13 million (Rs 90 crore when reported ) through a mix of equity and debt funding from Bisque Ltd and Link Investment Trust. The latest round follows a $20 million Series C that it raised in July 2018.

RA Hospitality Holdings, a Cayman Islands-based entity floated by Ritesh Aggarwal, founder and CEO of Oyo, has proposed a $2 billion investment into Oravel Stays Private Limited, the company that owns Oyo. In a statement, the company said that it will make this investment through a combination of  primary and secondary investments.

The announcement follows an earlier development, where in a submission to the CCI (Competition Commission of India), a proposal was placed by RA Hospitality to acquire equity securities of Oyo as well as the acquisition of part of the stakes held by certain existing shareholders of Oyo.

Earlier this month, Oyo pushed through a move to restrict the shareholding limit of its largest investor, SoftBank Group Corp to 49.99%.

Ebix Inc entered into a definitive agreement with Yatra Online Private Limited to acquire the latter in a cash and stock transaction, valuing it at $337.8 million (Rs 2326.86 crore when reported), marking the largest acquisition by Ebix in terms of ticket size by the US-headquartered software firm till date.

SoftBank-backed hospitality unicorn OYO officially announced its foray into co-working business with the acquisition of Delhi-based co-working space provider Innov8. The acquisition deal had been making the rounds for quite a few months now.

Sunnyvale and Pune-based cloud data protection firm Druva Inc acquired CloudLanes Inc, a Silicon Valley based startup that specialises in enabling the migration of on-premise data to the cloud.