Non-cash transaction volumes increased by 12% to reach 539 billion in 2017, according to the Capgemini Research Institute’s 2019 edition of World Payments Report (WPR).

Developing markets contributed 35% to this growth, and are poised to contribute half of all non-cash transactions by 2022 if they maintain their current rate, the report added. Widespread adoption of digital wallets, increase in ecommerce and innovation of mobile payments are driving the growth in the emerging Asia region.

Debit card transactions grew 17%, the fastest of all non-cash payment instruments while credit cards grew at 11% and credit transfers grew at 10 %, the report said.

In the report’s findings, Norway was ranked number one in per capita non-cash payments globally, and Sweden was predicted to be the first to achieve a cashless economy by 2023.

Not many banks take to open banking

“We encourage incumbent banks to consider quick-win solutions that position them for the future market such as implementing a micro-services architecture to circumvent the limitations of legacy infrastructure,” said Anirban Bose, CEO, Capgemini’s Financial Services.

The report suggests that continued push from regulators as well as market participants like fintechs would help smoothen the open banking transition.

Such a transition would help banks achieve payment standardisation and interoperability for better communication between multiple services, solutions and standards. Streamlining growth of non-cash transaction volumes will help payment services to compete in the open banking ecosystem of payments, the report said.

The report also said that India joined the top 10 group surpassing Australia in terms of non-cash transactions. The report said this was primarily driven by growth in credit-transfer volumes as well as the efforts by the National Payments Corporation of India in promoting instant payments and open APIs. 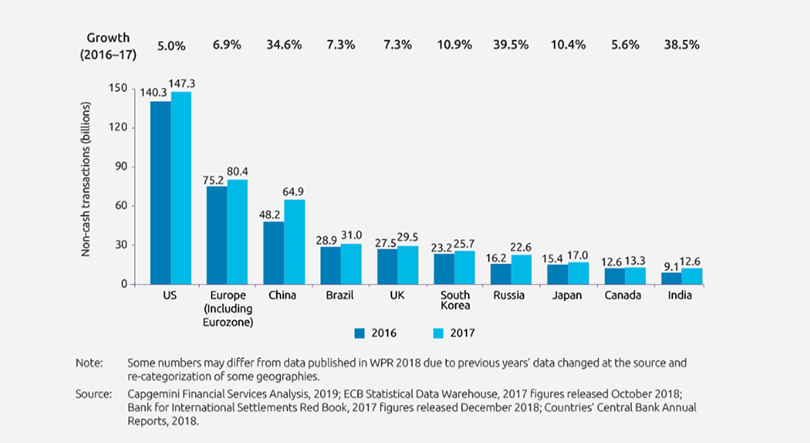 On Monday, NPCI reduced the merchant discount rate (MDR) on cards at the point of sale, ecommerce and BharatQR-based transactions in India.