Fundraising in India’s fintech companies nearly doubled to $3.7 billion in 2019 from a year ago estimate of $1.9 billion, according to a report from global IT giant Accenture.

This places the subcontinent as the world’s third-largest fintech centre, behind only the United States and the United Kingdom.

The number of deals was at 198, up from 193 in 2018. Accenture based its report from the data provided by global venture-finance data and analytics firm CB Insights.

Key takeaways from the report were:

“The increase both in deal value and the number of deals is a good indicator of what’s to come and bodes well for the future development of cutting-edge financial technology in the country,” Sonali Kulkarni, managing director at Financial Services of Accenture in India said.

Despite the domestic gains, the total value of fintech deals globally decreased by about 4% to $53.3 billion from 2018, a year which saw $14 billion pouring in from Ant Financial and three other multi-billion-dollar deals from Chinese companies, the report added. 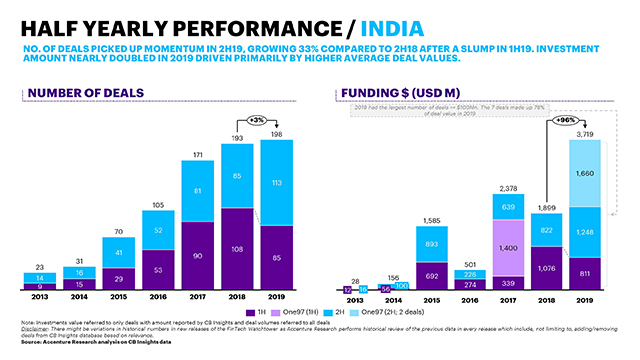 There is a lot of growth, particularly for challenger banks that are expanding in their home markets and overseas, as well as for payments providers, Skan added.