Venture capital (VC) investment in India fell sharply to $2.2 billion in Q1 of 2020, according to a report by accounting services company KPMG.

India saw a record-breaking $6 billion worth of investments in Q4 of 2019. According to the report, VC firms will now wait to see how the pandemic affects businesses before writing more cheques. The full impact of the pandemic on the Indian VC funding segment will likely be felt in the second quarter of the calendar year. 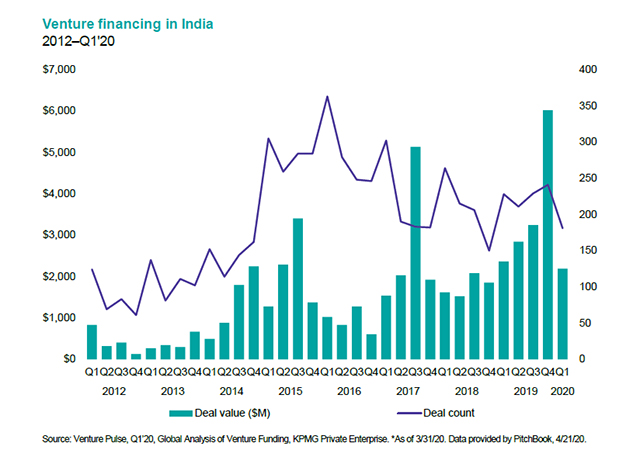 “VC investors are already starting to ask the question, ‘How will your business be impacted by Covid-19?’ This is a question everyone will be asking for the next few quarters. Here in India, we are beginning to feel the full impact of the virus. Over the next quarter, while the pipeline will likely remain strong, deal flow is expected to slow down. A lot of deals will probably get deferred to the later half of the year,” Nitish Poddar, partner and national leader - private equity, KPMG in India said.

Despite these challenges, India has seen a number of good-sized deals, the report titled Venture Pulse Q1 2020 said.

Edtech has gained a sizeable portion of VC investment. Other sectors that have gained traction include autotech and healthtech.

Bengaluru-based edtech unicorn Byju’s raised a total of $400 million from Tiger Global and General Atlantic at the beginning of the year. In February, General Atlantic also invested $110 million in test preparation platform Unacademy.

Gaming could also see an increase in VC investment in India, the report added.