The rise and rise of digital-first brokerage platforms

In June this year, when the country was crippled by a prolonged lockdown on account of the ongoing Covid-19 pandemic, Upstox, an online brokerage platform owned by Mumbai-based RKSV Securities, hit 1 million customer accounts. The milestone came eight years after the company was founded.

In a few weeks, the startup expects to double the number of customer accounts.

“Last September we had about 300,000 accounts and this September, the number went up to 1.8 million. That’s a 6X increase,” Upstox co-founder and CEO Ravi Kumar told TechCircle.

Tiger Global Management-backed Upstox belongs to a small but growing tribe of startups that offer a digital-first spin to the traditional stock brokerage business. The tribe is led by Bengaluru-based Zerodha Broking, which had over 3 million user accounts as of October this year. “At a company level, we will see 50-60% growth this year,” Zerodha co-founder and CIO Nikhil Kamath said.

Another recent entrant is Bengaluru-based Nextbillion Technology, which operates wealth management platform Groww. In June this year, the company ventured into equity stock investment brokerage for its clients. Groww claimed to have around 8 million registered users across product categories as of September 2020. The company declined to provide details on the product-based split of its user base. 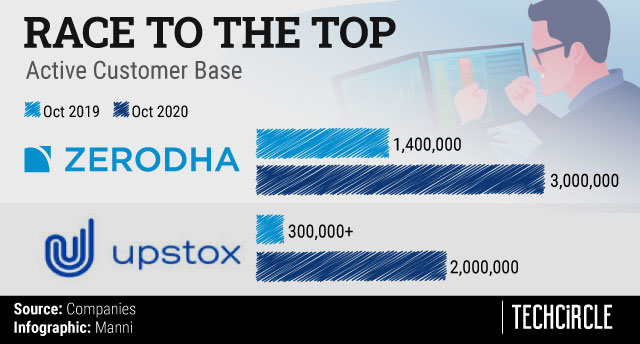 About two-thirds of Groww’s client base, co-founder and CEO Lalit Keshre said, are first-time investors, and 60% are from non-metro cities. Upstox derives 80% of its users from tier-II and tier-III cities. Zerodha’s largest markets include tier-I cities such as Mumbai, Pune, Bengaluru, Delhi and Chennai, followed by tier-II cities such as Ghaziabad and Ahmedabad. Users on all three platforms typically fall in the 28-30 age group.

Race to the top

Zerodha Broking, which became the country’s largest stock broker in terms of active customers in January 2019, was started in 2010 when the industry already had established online stock brokerages, including Sharekhan and Angel Broking.

Kamath and his older brother Nithin Kamath, who is the CEO, set out to bring in transparency in terms of product, services and charges offered in the stock broking business, both online and offline. 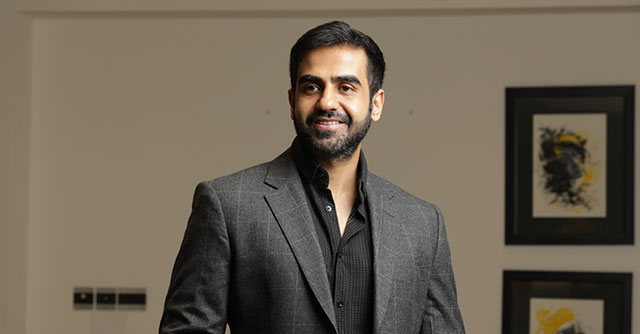 “When we started, the user experience wasn’t smooth and people had no idea what and how they were being charged,” Kamath said. It took the Kamath brothers several years of product building and gaining credibility and trust as a brand before their company’s customer base started increasing.

“In the first three-four years, we were trying to solve the technical issues and build a simplified product. Eventually, we went from being just a product play to a service play. We brought in features like technical and charting analytics,” he said.

Upstox’s Kumar credits the sudden upsurge and growth to initiatives such as Aadhaar and e-KYC, which made onboarding new customers safer and faster.

“Before Aadhaar, the paperwork happened manually. We had to go with a bunch of 25-30 papers, getting their signs on each sheet. Sometimes we had to courier the documents to get it signed and still there would be errors and discrepancies. It was a tedious and expensive process to open accounts,” he said.

When Kumar and his co-founder Shrini Viswanath founded the company in 2012, they were looking to build an online business in a world that was still largely offline. “Brands like Sharekhan had offices, branches and franchises everywhere. We had to go and meet people to get them to sign online,” Kumar said. 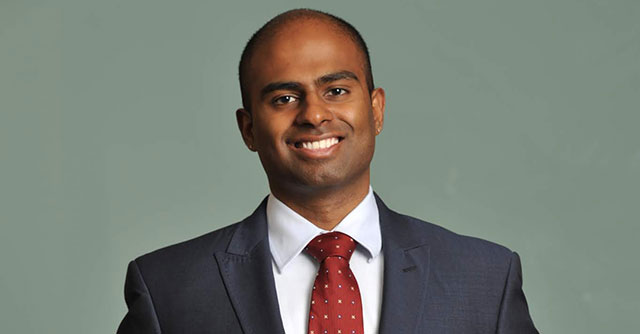 Soon, the internet and the internet economy boomed even in the tier-II and tier-III cities, and then there was no looking back for digital-first brokerages. What ensured further success was the ‘discounted’ model that made way for aggressive pricing.

“Now for online discount brokerage, they started with the execution leg only. They did not have cost overheads of research and advisory. So they could price themselves more aggressively,” Prabhakar Tiwari, CMO of Mumbai-based Angel Broking, said.

Online discount brokerage firms operate on an economy of scale. The zero-commission platforms charge only for intra-day trading transactions, with rates as low as Rs 20. To open an online account using Zerodha, a user has to pay Rs 200 for trading and demat accounts, and Rs 100 for commodity accounts. Opening charges at Upstox start from a price point of Rs 249.

Even as annual maintenance charges (AMC) are added eventually, the rates are lower than price points of traditional counterparts such as HDFC Securities and ICICI Direct, which charge as high as Rs 999 for opening of accounts.

Angel Broking, as an offline business, has been operating for about 25 years, and according to Tiwari, the company revamped its website-based services and launched the platform five years ago. It currently sees about 60% of its customers coming from tier-III cities, followed by 30% from tier-II and only 10% from tier-I cities. Having found the digital model more scalable and economical, the company in 2019 converted to a discount broking format, passing on the cost benefit to customers.

“In tier-I cities, most of the brokerages and banks will have multiple branches. But tier-II and tier-III cities have been highly underserved. Thanks to technology and social media, they are now able to get information at the tip of their fingers and in the language they want. These customers are directly going to the apps and managing their journey right from creating their demat accounts,” Tiwari said.

In contrast, Sharekhan, owned by Paris-based BNP Paribas, believes there will be takers for both full service and discount brokerages as they cater to different customer bases. In September 2020, the firm launched a discount brokerage platform called Espresso.

A Sharekhan veteran with over 20 years of experience at the company, R Kalyanraman heads the platform as chief customer officer.

“The discount brokerage trend started gathering steam over the past six-eight years but that doesn’t mean Sharekhan’s transactions were drying up. We kept adding new products and expanding our customer base. But over the past two-three years, we saw an increase in the number of do-it-yourself customers, who just needed tools to do things themselves,” he said.

Kalyanaraman added, “Typically, the new age DIY users are a lot younger. When Sharekhan was a startup 20 years back, the customers themselves were much savvier because there was lack of information and they couldn’t rely completely on online information. Internet and technology penetration wasn’t good either. Vis-à-vis current times, the users have a global outlook, access to various information sources; they are willing to take risks and learn. Also, they are a lot more aggressive.”

“The users coming to Espresso are between 20-25 years of age, whereas Sharekhan still sees 27 to 35-year-olds coming to the platforms. They have the investible surplus to invest but would also want to reach out to somebody when in trouble or having a query,” he said.

Espresso till date has about 2,000 users, who are only charged a fee when they make a profit. The platform has also been doing its explanatory and how-to videos in vernacular languages, including Hindi and Gujarati.

The DIY mantra is an aspect that sets the new age online discount brokerage apart from its traditional counterparts. The latter’s full-fledged services include in-house stock analysts and researchers who provide advice to the customers.

“We don’t have a call centre, we don’t call customers. We don’t advise or recommend any stocks to our customers, and so on. It becomes very important for customers to think in their control and they want to take calls… Because of the DIY opinion, most of the internet consumption is by young folks,” Groww’s Keshre said.

In January 2019, Zerodha became the top brokerage firm across online and offline user bases, according to NSE data. In September, Upstox became the second largest, leaving behind traditional brokerages such as  ICICI Securities and HDFC Securities. While Zerodha currently processes transactions worth $10 billion on its platform, accounting for 15% of the overall industry turnover, Upstox declined to share its daily transaction details.

Yet, the market opportunities for brokerage firms are aplenty.

“Of the 1.3 billion population, there are only 4 crore demat active accounts in the country,” Kalyanaraman added.

Only 2-3% of India’s population invests in the stock markets at present, according to data cited by Upstox’s Kumar, who added, “in the United States and some European countries, the penetration is much higher, at 25-40%.”

“The wealth is growing. Millennials are coming into the workforce, making a lot of money… So there was this generational shift, movement of offline to online, government push, timing, and then, of course, the big market opportunity. In India, there are more than 200 million people with fixed deposits,” Groww’s Keshre said, hinting at the scope of the investments business.

As the competition closes in, players are leaving no stone unturned to keep customers engaged. For instance, both Upstox and Zerodha now offer brokerage-as-a-service through an open application programming interface (API) to let client businesses build their broking platforms on top.

Zerodha’s Kite Connect API product has over 100 clients that are charged on a monthly basis depending on the usage, Kamath said. Upstox declined to comment on its API business user traction and pricing.

Upstox will officially launch its global investing platform by early 2021. “By the end of this quarter, you will be able to buy USA stocks on our platform. We are allowing fractional investing through it. For instance, buying Apple stocks would be difficult and expensive in India. But now customers can buy, say, Rs 200 worth of Apple stocks,” Kumar said.

Upstox also plans to launch digital gold services. Groww launched its digital gold services recently. “The current challenge is the product backlog... Stocks are very deep products. Derivatives, futures, and options, international markets equity are still remaining to be launched on our platform. (The) idea is to offer the customer everything from low-risk to high-risk products,” Groww’s Keshre said.

Groww did not monetise its products until its equity trading services were launched. Direct mutual funds are not a charged product. As Y Combinator Continuity’s first India bet, it raised $30 million (about Rs 220 crore) in a Series C funding round, led by the Mountain View, California based investor, in September. Its other investors include Sequoia India, Ribbit Capital and Propel Ventures.

In the financial year ended March 2019, its parent entity reported total revenues at Rs 20.1 lakh. Its net loss shrunk to Rs 23.4 lakh, from a little over Rs 1 crore a year earlier. It is yet to file financials with the Ministry of Corporate Affairs for the period ended March 2020.

With the sudden upsurge in user base, the primary online discount brokerages are already profitable, having limited operational costs to account for.

In the financial year ended March 2019, Upstox’s parent entity reported total revenues at Rs 56.8 crore. Its net profit rose to Rs 13.1 crore, from about Rs 2 crore a year earlier, according to regulatory filings.

Upstox, in September 2019, had raised $25 million in its second round institutional round from New York-based hedge fund Tiger Global Management. It is backed by Ratan Tata and venture capitalists Kalaari Capital and GVK Davix.

Zerodha, on the other hand, has been bootstrapped since day one. The company grew its consolidated revenues (five separate companies constitute the Zerodha platform) 46% to Rs 950 crore in financial year 2018-2019, while net profits grew 50% to Rs 350 crore, according to a company spokesperson. In financial year 2016-2017, the consolidated revenues stood at Rs 200 crore while profits were at Rs 100 crore.