Elon Musk-owned electric vehicle (EV) company Tesla has registered a fully-owned subsidiary in Bengaluru, and looks to set up an R&D unit in the city soon.

The office, situated on Lavelle Road in Bengaluru, is registered with a total paid up capital of Rs 1,00,000 and authorised share capital of Rs 15 lakh.

Karnataka chief minister BS Yediyurappa welcomed Musk and the company to India in a tweet. However, the post was deleted hours later. 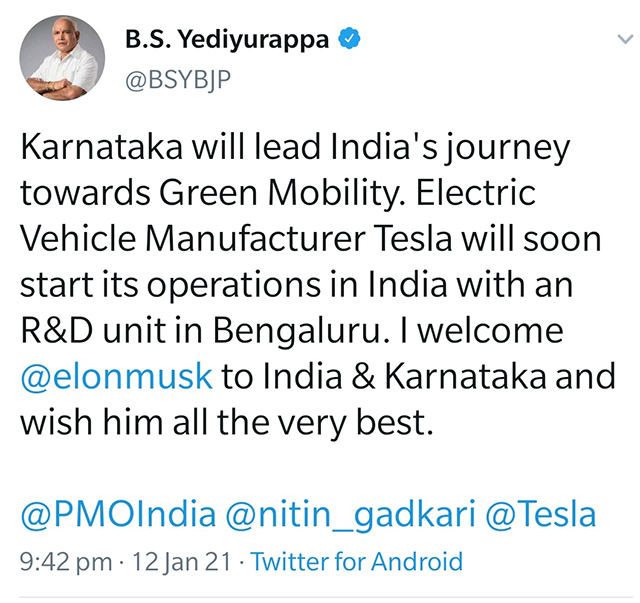 While both the central and state governments have been pushing adoption of electric vehicles, Karnataka was the first state to come up with a dedicated EV policy in 2017. In December, the state approved investments worth Rs 22,419 crore for EV and lithium-ion battery manufacturing -- this is likely to generate 5,000 jobs.

The Cupertino, California-based company enters the Indian market at a time when startups such as Ola, Uber, Bounce, Yulu and Vogo are looking to expand their EV fleets. Companies such as Ather Energy, Hero Electric, Ola and Mahindra are active in the manufacturing space, catering to the incoming demand.