The IPO will make Nazara the first Indian gaming company to list on the public markets.

Mumbai based Nazara had earlier filed a DRHP with SEBI in February 2018 which was approved by the market regulator but the company did not launch its public issue.

The company will now offer 49,65,476 equity shares for sale by promoters and investors at a face value of Rs 4 each, according to the prospectus. The shares on sale include 6,91,9000 equity shares from Mitter Infotech LLP, a promoter of the company. 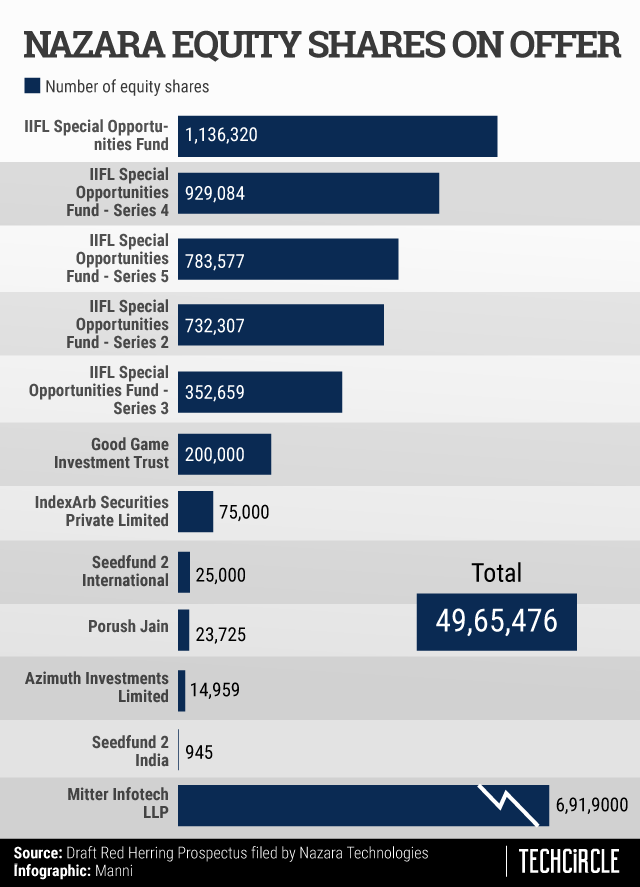 Earlier this month, Plutus Wealth Management purchased shares worth Rs 500 crore in Nazara from WestBridge Ventures II Investment Holdings, giving an exit to the latter which has been an investor in the company since 2005. Investors in the company include Rakesh Jhunjhunwala, Turtle Entertainment, Absolute Sports, JetSyntheses and others, according to data sourced from VCCEdge.

Founded in 2000 by Nitish Mittersain, Nazara Technologies provides a diversified gaming and sports media platform. The company, which has a presence in markets including Africa and North America, offers gamified early learning, eSports, mobile gaming as well as skill-based and fantasy trivia games.

The company has made multiple acquisitions and investments over the years. In October 2019 it backed pre-school edutainment app Kiddopia. In the same year it acquired a majority stake in video game developer, Sports Unity and multi sports content platform, Sportskeeda. It also acquired eSports platform NODWIN gaming in 2018.

The company, which claims to dominate the eSports market in India with an 80% market share according to the prospectus filed with SEBI, also conducts tournaments in partnership with global gaming publishers as well as partners with leagues and brands. It also hosts offline gaming tournaments such as ESL India Premiership, DreamHack, KO Fight Nights, among others.

Nazara also said that its offerings on freemium cricket simulation games, including WCC franchise, are a majority contributor to its freemium mobile games vertical.