It’s September and Apple’s new consumer devices are upon us. While the Apple iPhone 13 series and the new iPads will be available in India later this month, the Apple Watch Series 7 has been delayed globally, perhaps due to a crippling chip shortage that has been plaguing the industry.

Unlike last year though, the 2021 editions of Apple’s devices bring minor updates. This wouldn’t surprise many, given the big changes the company made to the iPhones last year. Apple usually follows big iPhone updates with lean years, making smaller changes to its devices. To that end, here’s what’s new in this year’s iPhones, Apple Watch and iPads.

The technology giant is continuing with the four iPhone models it started last year. The company will be selling the iPhone 13 Mini, iPhone 13, iPhone 13 Pro and the iPhone 13 Pro Max this year. The iPhone 13 and 13 Mini will be sold in India at Rs. 69,900 and Rs. 79,900 respectively, while the Pro and Pro Max will be priced at Rs. 1,19,900 and Rs. 1,29,900 respectively. All the devices will be available in India from September 24 onwards, with pre-orders starting on September 17.

The four devices haven’t changed in terms of design. The only significant change on the iPhone 13 and iPhone 13 Mini is that they have the new Apple A15 Bionic chipset. The company claims that this is the fastest CPU in a smartphone ever and is 50 percent faster than competing processors. Like last year’s A14, the A15 is still a hexa-core chip built on the 5nm fabrication process though.

The company also claimed that the iPhone 13 and iPhone 13 Mini will get an extra 1.5 hours and 2.5 hours battery life, respectively, over their predecessors.

On the other hand, the iPhone 13 Pro and Pro Max have more meaningful changes. While the two phones also run on the A15 Bionic chipset, they have displays with faster refresh rates and better cameras.

Refresh rate is how many times a display can draw new images per second, which enhances the user experience on games, UI navigation and specific types of video content, like sports. The fact that the iPhone 12 series had only 60Hz displays was a point of criticism from reviewers and experts last year, which is perhaps why the company bumped this up to 120Hz this year. Like high end Android phones from companies like Samsung, the iPhone 13 Pro series can also vary the refresh rates between 10Hz and 120Hz dynamically.

Furthermore, Apple is also targeting pro users, like film makers, with the three cameras on the back of its new ‘Pro’ iPhones. The wide camera offers better low-light photography, according to Apple, while the ultra-wide camera has wider aperture, which helps in low-light photography and depth perception. In addition, the telephoto camera can now go up to 3x zoom, and the phone can offer a total of 6x zoom using its three cameras at the same time.

On the software front, Apple has added its Night Mode feature to all three cameras now. The phones also have a new macro mode, which will apparently allow them to shoot subjects that are as little as 2cm away. There’s a new feature called “Photographic Styles”, which uses computational photography to add filters that make the smartphones’ camera produce results similar to those done by traditional camera filters.

Computational photography is the use of algorithms to enhance the final image from a camera, beyond what the sensor and lens can produce. Like Google, Apple has also been using artificial intelligence (AI) algorithms for the past couple of years to enhance its smartphones’ cameras.

Further, a new “ProRes” feature offers videographers the ability to shoot videos in higher quality and more control when they are post producing them. The feature will come in a “future iOS 15 update” and shoots videos in Dolby Vision HDR quality.

Compared to the iPhones, the Apple Watch Series 7 has almost no new updates. The device has IP6X certification, meaning it can not only withstand up to 50 metres of water but is also resistant to dust. Apple also claims that the glass on top of the Apple watch is “more crack resistant” now due to its geometry. The bezels around the display are also slimmer and the always-on display is 70 percent brighter, according to Apple. It will also charge 33 percent faster and offer the same 18-hour battery life on each charge.

The iPhone 13 series and the new Apple Watch 7 are accompanied by two new iPads. The iPad (9th Generation) uses the two-year-old A13 Bionic chipset, which the company says will enhance its performance by 20 percent compared to its predecessor. It has a 10.2-inch display and supports Apple’s True Tone feature, which calibrates colour based on ambient light. It works with the Apple Pencil and has 64GB storage on the base model, up from 32GB earlier. 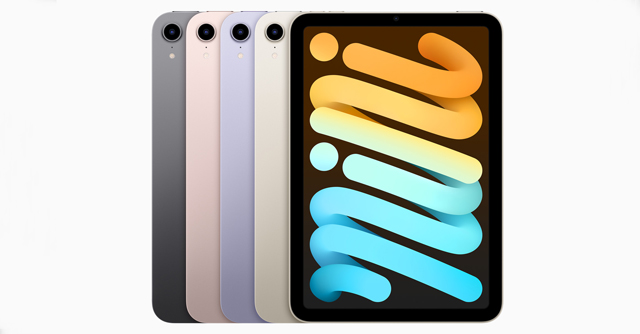 On the other hand, the new iPad Mini supports 5G connectivity and a smaller 7.9-inch display. It’s the smallest tablet in Apple’s device even though the display is larger than the one on its predecessor. It runs on the A15 Bionic chip and has the “Focus Pixels” feature, which Apple had used in the iPhone 6 series.

Both the iPads support Apple’s Centre Stage feature, which allows the front cameras to follow the user during video calls. The technology uses the wider field of view of these cameras to keep the user at the centre of the frame.