Everything Apple announced at its ‘Unleashed’ event today

Tech giant Apple just concluded its second big event for 2021. The so called ‘Unleashed’ event was all about Apple’s new PC chips, and the company focused more on Pro users this time. Here’s everything Apple announced.

Pre-event rumours said Apple would come up with a new M1X chip. Instead, the company launched two new chips, meant specifically for power users. The M1 Pro chip has 33 billion transistors, while the M1 Max has 57 billion transistors, which is over twice and 3.5 times the number of transistors on the original M1 chip. Apple is promising 1.7 times the CPU performance per watt from these new chips as compared to the older M1 chip.

The two new chips will come on Apple’s new Macbook Pro models, and the company is offering a 16-inch and 14-inch models for this laptop this time. Notably, the new 14-inch version has a notch and Apple is bringing the ProMotion display technology to Macbooks now. This allows variable refresh rates on the Macbooks, allowing the display to dynamically switch between 10Hz to 120Hz as required by an app or content.

The company also increased the selection of ports on these devices. They have three Thunderbolt 4 USB Type-C ports, an HDMI port and SSD slot. The MagSafe charging port will also return, but the laptops can also be charged using the USB ports. Interestingly, despite the addition of the notch on the 14-inch variant, Apple isn’t bringing its FaceID unlock mechanism to Macs yet. 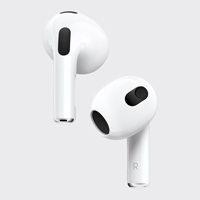 The Cupertino-based tech giant also refreshed its Airpods line, adding Spatial Audio to these true wireless headphones. This feature was limited to the Airpods Pro so far, and brings better directional audio to Apple’s headphones. The new device also has a revamped form factor and design, and will be sold at Rs. 18,500 in India. Apple dropped the price of the Airpods 2 to Rs. 12,900.