Windows 11 hasn’t rolled out to most users yet, but Microsoft is pushing out a new version for schools and other educational use cases. Christened Windows 11 SE, the platform is meant exclusively for low-cost laptops built for K-8 level classrooms, which refers to elementary and middle-school use-cases. The company also announced a range of devices that will run the platform, making this yet another attempt from Microsoft to take on Google’s ChromeOS in the education sector.

“Windows 11 SE was designed and built during the pandemic to address the most fundamental challenges that schools will face in the blended learning world. It brings performance enhancements that optimize resources on low-cost devices to deliver more comprehensive learning experiences and is simple to deploy and manage,” said Paige Johnson, Vice President of Education Marketing, in a blog post.

What is Windows 11 SE

This isn’t the first time Microsoft is taking a shot at Google’s ChromeOS. The company had tried an “S Mode” for Windows 10 in 2018 but it didn’t work. It also had a toned-down version of Windows 10, called Windows 10X, but discontinued it later.

Windows 11 SE is optimized for Microsoft apps, like Office, the Edge browser, OneDrive and other cloud services. However, a big difference between S Mode and SE is that SE doesn’t restrict users to downloading apps from the Windows app store alone, which is also in-line with a more open approach Microsoft has been taking recently, as compared to Google or Apple.

“Windows 11 SE also supports third-party apps including Zoom and Chrome because we want to give schools the choice to use what works best for them. We are committed to continuing to expand third-party app support to include the most common test taking, accessibility, content filtering and classroom orchestration apps,” Johnson’s post said. The platform will also have features that allow IT admins to deploy and manage devices remotely and right out of the box.

The new platform won’t have Windows 11’s new Snap Layouts feature, which allows apps to be viewed side-by-side. It will also open all apps in full-screen mode by default, and as a security measure only IT admins will be allowed to download apps directly to the device. Windows 11 SE won’t have Widgets feature, which is one of the prime features of Windows 11.

Furthermore, unlike Windows 11, Microsoft Edge on the new classroom-focused version will recognize Chrome extensions automatically. This is disabled on regular versions of Windows 11, but given ChromeOS’ success in education markets overseas, it could facilitate easy transitions to Windows 11 SE. 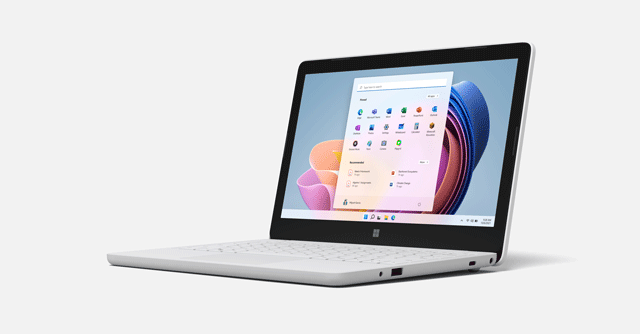 The Pixelbook is meant to showcase the best of Google’s ChromeOS, and the Surface line does that for Microsoft. Windows 11 SE is accompanied by the Surface Laptop SE, which starts at $249 in the US.

Unlike the powerful specs of most Surface laptops, the base model of the Surface Laptop SE will run on an Intel Celeron processor, with 4GB of RAM and 64GB eMMC storage. It has an 11.6-inch display with 1366x768 pixel resolution, which is a big step down from the PixelSense displays most other Surface devices use.

On the specs front, the Surface Laptop SE is a significant step down from even the Surface Go 3, which is the company’s entry-level laptop right now. It’s cheaper too though and the company claims it will provide 16 hours of battery life on “typical use”.

The Surface Laptop SE should start shipping from later this year and that Windows 11 SE will also come to devices from Acer, ASUS, Dell, Dynabook, Fujitsu, HP, JK-IP, Lenovo and Positivo, soon, and will be powered by Intel and AMD processors.

It seems Microsoft will only provide Windows 11 SE to laptops being sold directly to schools, as is the case with the Surface Laptop SE. Which means that it’s unlikely that we’ll see too many of these devices in India, at least in the short run. While both Google and Microsoft have made education a point of focus in markets like the US, the Indian education sector is still largely untapped in comparison.