Indians spent more time on apps in 2021 than ever before

Indian consumers are spending more time on mobile apps than ever before. According to a third quarter 2021 report by mobile analytics firm App Annie, the average daily time spent on apps broke the 4-hour mark for the first time in Q1 2020, and grew to 4.8 hours during the quarter ended September 2021. The report also noted that total app downloads grew by 28% year-on-year during the quarter to 24 billion during the same period.

Further, nearly one in every five downloads was a mobile game. App Annie’s report said that India is the largest market in the world for game downloads, which accounted for 4.8 billion of the 24 billion downloads during the quarter. 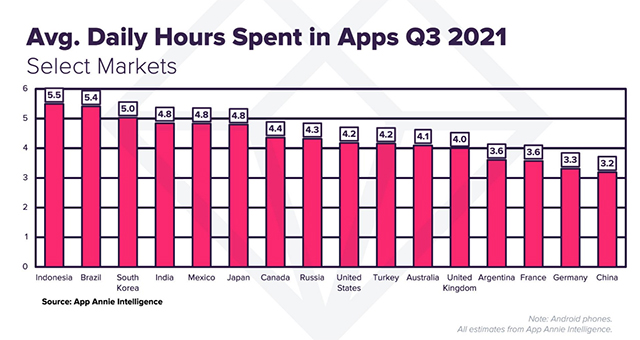 Interestingly, despite increased interest in fantasy sports apps and real-money gambling platforms, Ludo King was the most downloaded game during the first half of year, in terms of both downloads and average monthly active users (MAUs). Also, homegrown game publishers accounted for only 7.6% of the total game downloads, while Chinese game publishers led the charts, the report said.

The report also suggests that despite the Indian government’s ban, PUBG Mobile remains popular amongst Indian users. While Garena Freefire, a game that competes with PUBG, accounted for the most consumer spends during the third quarter, the popular battle royale game from Krafton Inc. was the second in terms of money spent by consumers. The report did not reveal how much consumers spent on this game.

Fintech apps and the government’s unified payments interface (UPI) also saw increased usage during the period. During the third quarter, Indian users spend 5.4x more time on fintech apps than they did during the same time last year. It’s worth noting that the third quarter is also popular for festive purchases, many of which are made online and through e-commerce platforms.

Crypto platforms WazirX and Coinswitch Kuber, along with trading platform Upstox Pro, saw the highest growth amongst finance apps, though App Annie didn’t reveal how much their user bases grew by. Coinswitch, which became the 30th Indian unicorn in September and the second crypto unicorn from India, had said that it had more than 15 million users at the time.