On the face of it, Huddle01 appears to be just another video-chat app, similar to apps like Google Meet and Microsoft Teams.

The company, however does not agree. It claims to be the world’s first decentralized video conferencing solution, and it’s being built out of coffee shops in NCR’s Noida. The app is built around a core concept of the third generation of the Internet (web3) — decentralization. Unlike Meet, Teams, or Zoom, Huddle does not run on centralized servers. Instead, it leverages a network of smartphones, laptops, and decentralized storage systems.

The idea has been explored in the popular television series Silicon Valley, where a coder called Richard Hendricks builds a whole new Internet that’s based on such a network. In the real world, 26-year-old Ayush Ranjan and Susmit Lalwani, are not too different from the creators of Pied Piper (the company Silicon Valley revolves around).

Lalwani, who is now the co-founder of Huddle01, built a decentralized cryptocurrency exchange back in 2018, which he then aqui-hired by crypto-unicorn CoinDCX. Lalwani also worked at CoinDCX for about a year, but now serves as the co-founder and chief technology officer (CTO) of Huddle01. Ranjan, too, has worked in a bunch of startups, including e-commerce startup Zefo. 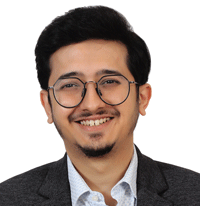 “We wanted to build a peer-to-peer video conferencing solution, where there would be no servers in between,” said Ranjan. “What we realized (after building it) was that it was very powerful,” he added, claiming that the latency reduced to one-fifth of server-based solutions.

Latency is the time taken for data to travel from a source to the end-point. In video conferencing, low latency means better video quality and fewer disruptions. Centralized services and solutions try to do this by setting up more and more data centres to bring the source of the data as close to the end-user as possible.

The job of centralized storage in Huddle is accomplished by Filecoin, a decentralized storage service. Filecoin stores data when needed, like in recording calls. While calls happen on peer-to-peer networks right now, the company is moving to edge computing. Which means that a call on Huddle is purely powered by smartphones and PCs on the call, while edge computing will let the company draw power from other such devices that are near the users on the call.

On the other hand, users can use Huddle as a video conferencing tool, become miners who power the network, or both. In future, the company will provide economic incentives through crypto to its users in order to power the calls on its network. "As the number of users on a network like Huddle grows, the value of that network itself increases, and so does the value of the tokens," said Pareen Lathia, founder of Buidler's Tribe, a startup incubator that focuses specifically on blockchain-based startups, and participated in Huddle01's seed round. 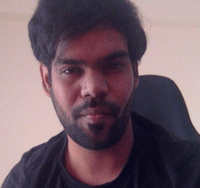 Unlike current solutions, Huddle01 won't get to decide how much to charge users, enterprises etc. or what features to build.

"In web2, whenever you have a service provider at scale, it gets to dominate the market. When a platform gets momentum, producers and consumers both come to that platform," said Praphul Chandra, founder of Koinearth, a homegrown blockchain startup. "The idea with web3 is to build systems where there's no single entity that controls the market," Chandra added. For Huddle01, the power will someday be distributed between the miners. The platform itself will require approval from a majority of its miners in order to pass a new feature, raise prices and more.

Using decentralized storage also means that no one party owns or controls the data flowing through a platform. The mobile phones and computers on Huddle’s network cannot snoop on the data, because again, no one party has access to all of it. The data is stored in bits and pieces in various places, and it all works because the system sends the right bits to the right devices when needed.

As a result, Huddle01 doesn’t require users to create accounts, because there’s no way to track users and advertise to them anyway. It also means that Huddle01 cannot share data with governments or law enforcement, even if it wanted to.

Ranjan admitted that it will be a while before the platform can handle the scale that solutions from Google, Zoom or Microsoft can, but there’s no dearth of features on it right now.

Like popular solutions, Huddle already has features like recording, background blur, polls etc. In addition, it’s already looking ahead to ideas like the metaverse, which tech leaders are imagining today. On Huddle, a user can link a non-fungible token (NFT) to their account and appear as an avatar during a call. 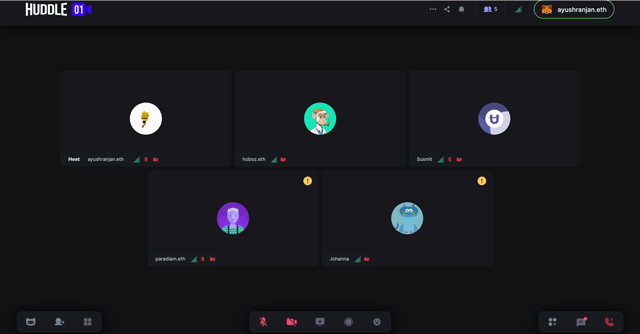 At the moment, that avatar will likely be popular NFTs like Cryptopunks or Bored Apes, but as Meta’s (formerly Facebook) Mark Zuckerberg discussed during his metaverse presentation last month, avatars will almost exclusively be NFTs in the metaverse world. Doing this will require you to link crypto wallets like Metamask, which hold these NFTs. The company will also charge enterprises, in future, for specific features like live streaming etc.

Ranjan and Lavania took the platform to a start-up accelerator called Tachyon in September last year, which was followed by a seed round of around $2 million in March. The round was led by Protocol Labs, which runs Filecoin, and included ex-Andreesen Horowitz partner Preethi Kasireddy and Polygon's Sandeep Nailwal. Protocol Labs founder Juan Benet also invested in an independent capacity.