Bengaluru-based two-wheeler rental startup Bounce has launched its first electric scooter, the Infinity E1, today. The company said it is betting heavily on the battery as a service model, and plans to offer its electric scooter at a price point of Rs. 45,099 (Delhi ex-showroom). The version of the scooter that comes with a battery and charger will be sold at Rs. 68,999. Deliveries for the scooter are slated to begin deliveries by March 2022.

Bounce said that the battery-as–a–service model will remove the onus of owning the battery from the customer. Instead, customers will be able to go to specific locations, called battery swapping stations, and swap out the battery when needed, after paying a nominal fee of around Rs. 80. The company said that the swapping model will push down running costs of the scooter by 40% as compared to conventional scooters.

The ride-sharing firm already has a battery swapping infrastructure in place for its rental bikes, the technology from which will be leverage for the commercial consumer EV. Bounce announced a partnership with smart parking solutions provider Park+ on December 1, to setup around 3,500 battery swapping stations in 10 cities in the country. It also plans to scale up to 20 cities over the next year, and has set aside $100 million for the same.

“Battery swapping solves problems such as range, and charging. With battery swapping, these two issues are mitigated. Another important aspect is that the cost of the scooter comes down drastically,” said Vivekananda Hallakere, Co-Founder & CEO, Bounce, told TechCircle.

Hallakere said that the company has built a battery management system (BMS) to suit Indian conditions, along with tracking intelligence solutions. BMS is technology used to manage battery charging, monitor battery health etc. The company will also use Switched Reluctance Motors (SRM), which are motors deliver higher efficiency than traditional DC Motors, in its EVs. 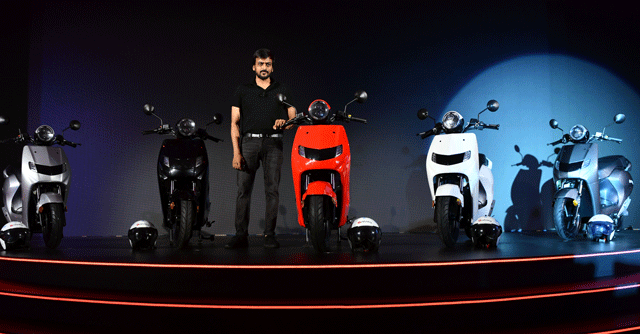 “With SRM, electric vehicles don’t need magnets, they can instead be built using copper. Since magnets are a rare element and there is only so much available on earth,” said Hallakere. “We already have a prototype and in next six months, we should have a working prototype for our scooters,” the CEO added.

Bounce launched the Bounce Loop platform in September last year, which allows two-wheeler owners to rent out their vehicles when it sits idle. The company is planning to implement the same solution on the Infinity E1.

“With Internet of things, the scooter is trackable remotely. We can also shut down the vehicle through remote access. Let’s say that if you rent out the scooter for eight days a month, the scooter is almost free for you. So, this can enable millions of them to have access to mobility,” said Hallakere.

The battery on Bounce's EV is a 48-volt, 39 Ah lithium-ion, with a charging time of 4-5 hours. Ride modes include eco, power and cruise control. Disc brakes come as standard. It is also equipped with features such as tow alert, anti-theft and geo-fencing, among others.

Earlier this year, Bounce acquired the EV manufacturing plant of Bhiwadi, Rajasthan based 22 Motors, with an annual capacity to manufacture 180,000 scooters. The Company plans to setup another plant in south India in the coming year.

Bounce has raised a total of $220 million in over nine funding rounds from investors such as Accel India, Sequoia Capital, Falcon Edge, Qualcomm, Omidyar Network and Maverick Capital, among others.