Hike, which shut down its messaging service earlier this year, has announced a cryptocurrency-based job referral rewards scheme. The company announced that it is giving a total of 4 Ether (the crypto token of the Ethereum blockchain) — which can be claimed by any user who successfully refers one of 10 candidates.

The Kavin Bharti Mittal company announced the initiative for its new initiative, called the Rush Gaming Universe (RGU). In a blog post, Hike has described the latter as a platform for users to challenge each other in myriad casual games. The decentralised gaming service is being built on a blockchain platform, for which Hike is now offering ETH rewards.

The rewards announced by Hike range from 0.2 ETH for a back-end gaming engineer, and ranges up to 1 ETH for a ‘crypto game economist’. The company claims that anyone can claim the ETH rewards by referring a potential employee. While applying, users can provide their Ethereum wallet addresses, and if their referrals are successful, the payouts will be issued to the winning wallet addresses.

The company claims that this is the first official employee referral scheme based on Web3 services in India. Until now, most cryptocurrency referral schemes are offered by token exchanges and related companies — with referral programmes run by the likes of Binance and Coinbase being among the most popular. 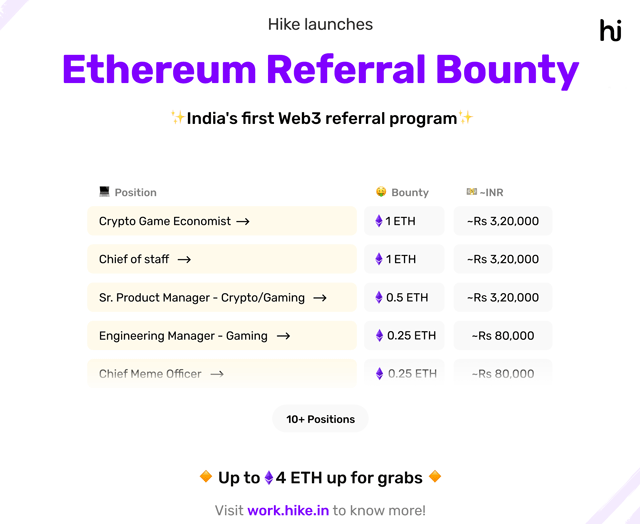 Hike, which started as an instant messaging service called Hike Sticker Chat to rival the then-independent WhatsApp, announced in early 2021 that it was finally shutting down its communication service. The latter served as its flagship product since the start of the company in 2012, and reportedly had over 100 million registered users back in mid-2016.

However, the service failed to capture the fancy of users in India, and since then, declined majorly in popularity to services that now include the likes of Signal and Telegram. Mittal, CEO of Hike, announced his company’s pivot from instant messaging to two services -- Vibe and Rush.

While Rush has been billed as a blockchain-based public gaming community platform, Vibe is reportedly an invite-based social community that pivots its offering on user privacy and safety.