Google Drive will now warn users when they’re about to open a suspicious file. The application will display a banner in yellow warning the user that the file could contain phishing or ransomware content.

The warning however is not new to Google, its other applications such as Docs, Slides, Drawings and Sheets already had the feature previously which was announced at Google’s Cloud Next in October. However, with the growing usage of GDrive, the security feature is a welcome addition to the file sharing service.

The alert will pop up as a yellow banner at the top of the attachment preview before the file is downloaded. The banner reads “This file looks suspicious, it might be used to steal your personal information”. 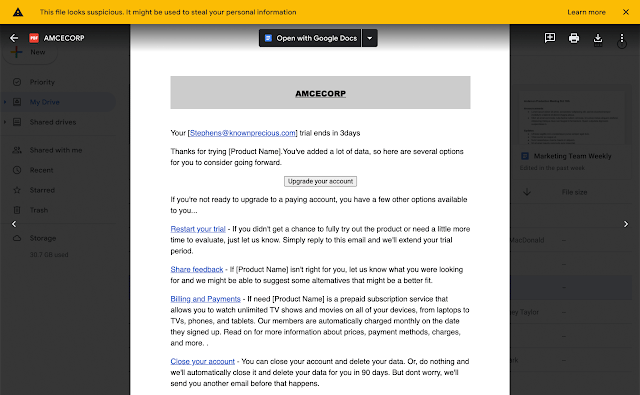 In 2020, reports of a GDrive scam, where a flaw in the drive was exploited to send out push notifications and emails from Google that had links to harmful websites which could install malware or ransomware.

The worrying factor of the scam is that it utilised the collaboration feature in Google Drive to send out push notifications asking users to collaborate on shared document.

The flaw that it utilises is that Google Drive by default wants the user to know when somebody has mentioned a name in the document.

The rollout began in phases starting on January 20 and will reach most users in a 15-day time period, Google said. The feature is expected to be available to all G Suite Basic, Business and Google Workspace customers.