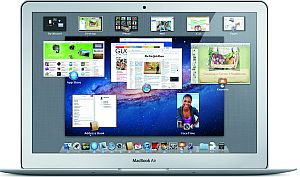 Over one million users have bought and downloaded Mac OS X Lion, the eighth major release of Apple's operating system. Users are buying Lion faster than any other OS release in Apple's history. But what is the big deal with the Lion? Quite a few things are here, actually. Lion introduces more than 250 new features to the Mac, and we will review some of the best for you.

But first things first. The OS comes with a $29.99 price tag for a single-user licence as an upgrade from Snow Leopard. There is also a server version which costs $49.99. The link to download is Apple's India website. Tempted to go and get a Lion right now? Read our review before you make an 'informed decision.'

The coolest new thing about Lion is, you can now pinch the touchpad or roll your fingers over it, to manipulate or resize the windows. Multi-touch gestures are borrowed extensively by the Lion from touchscreen tablet devices running on the iOS. So, will it be touchscreen Macs soon? Maybe, maybe not. Apple has brought touchscreen technology to the market for some four years now. But so far, these screens have showed up only in iPods and iPhones and, of course, the iPads.

Jobs thinks touch surfaces are 'ergonomically terrible' if they are vertical and ruled out the prospect of a touchscreen Mac hitting the shelves, talking at an Apple event last year (but others, like HP, have tended to disagree). Whatever it is, bringing touchscreen-like abilities to the touchpad makes it easier to surf the Web and look through folders. But you will need the newer glass-coated touchpads to get the full benefits of the multi-gesture roll. The best you will get with the older models is a two-finger scroll functionality.

If you fancy yourself in a spaceship, you now have a 'Mission Control' right in your 'Dock.' Forgive the aeronautical allusions, they were unintended. The 'Dock' was initially released in 2001 and since then, has been used as a launch pad for Mac applications, and also to toggle between different applications. The iOS has its own take of the 'Dock' as well.

The newly launched 'Mission Control' brings together 'ExposÃ©', 'Dashboard', 'Spaces' and full-screen apps to give you a single screen to see and navigate everything running on your Mac. This is especially helpful if you have multiple browser windows and applications opened simultaneously, and need to go from one to the other. However, 'Mission Control' does not yet come with a 'Beam us up, Scottie' button.

If there is a 'Dock', it may be cool to have a 'Launchpad', you may be thinking. Think no further, it has. 'Launchpad' gives you instant access to all the apps on your Mac, which means you get to bypass the trip to 'Applications' via the 'Finder.' With all the applications in one place, you can do the usual stuff â€“ rearrange the apps or delete them, or organise them in folders perhaps. As usual, dragging and dropping an app results in removing it from the Mac. It is typically a complete removal from the machine, but sometimes there are traces left. Apple does not have a Registry like the Windows, but it does have .plist files, which kind of walk and talk the same information. But most applications will not have support files outside the umbrella of the application folder. If you delete an application by mistake, you can download it back from the app store, as long as the app is available.

Ah, the much-discussed App Store. The Mac App Store is built right into the Lion (it is available for Snow Leopard users as a software update). But this is different from the apps for the iPhone, iPod or iPads. You cannot run an iOS app on your Mac yet. The Mac App Store in Lion supports in-app purchases, allowing developers to offer additional content for purchase within their apps.

Talking about apps, have you heard the one where the CEO of a company resigns from the board of another company, and from frenemies, the companies become bitter rivals? We are talking about Eric Schmidt and the Apple board, of course. Once upon a time, Google and Apple were close. But these are different times and Schmidt is no longer the Google CEO to boot.

Google Books vanished from the Mac Apps store. And neither of the companies would say why, even as the rumour mills churned out speculations, each riper than the other. Wall Street Journal has been among the companies (presumably, like Google) hurt by Apple's App Store policies, and it is not selling content directly to customers. But some others, like the magazines from the CondÃ© Nast and the Hearst Corp. stables, are there, in case you are looking for a light read. We also liked the Mashable and Techjunkie apps, and did we mention Angry Birds?

Mail has got a facelift. It now comes as a full-screen experience with wide-screen layouts, a redesigned message header, search tokens and conversations. 'Auto Save' automatically saves your work, so chances of you losing your work (just because you have forgotten to save it) are eliminated. 'Versions' creates a new version of a document each time you open it and every hour while you are working (it saves only the differences between successive versions). So, tracking changes between successive versions are easier, too. So far, so good.

The going is not all that good, however. If you have an older Mac model, chances are the touchpad will not support multi-touch gestures. Also, it was easier to upgrade to the Snow Leopard; but the Lion will need a slightly longer learning curve. It's different in a good way, but you will need some time to get used to â€“ some time before muscle memory sets in.

As of now, Lion is only available as an app at the online store. Roughly, 4 GB of files are here, which will not be available on a disk. Admittedly, downloading and upgrading happened to be a cinch at the machine we used for testing. We had multiple applications open while the software did what it had to do. If you are used to a Windows environment, especially the older operating systems, this will feel like a vacation on the French Riviera, with a few Kir Royale thrown in. Still, 4 GB would be a lot of download, especially if you are on a slow Internet.

But why can't Windows be more like Apple, you ask?

Because Apple systems are closed systems and the company can control everything, from the chipset to the graphics interface to the mouse. The software is meant to run on Apple hardware and the Apple hardware is built to run the Mac OS flavour of UNIX very specifically. It is all very cosy and tightly integrated. Windows, on the other hand, has a number of different vendors who build a full Windows system (how about a Dell machine, LG monitor, HP printer, Acer keyboard and a Logitech mouse? What about the whole gamut of software?). So, it's no wonder that the system crashes from time to time (although the explanation does not make the experience any less annoying). In fact, it is a marvel of software engineering that the system runs at all! Incidentally, Apple did try licensing Macintosh ROMs and associated system software to other manufacturers in return for a licence fee and royalties. But the cheaper 'Apple' clones which flooded the market cannibalised Apple's own sales. And the decision to decouple the op rating system was dropped in 1997 or so, just a couple of years after the strategy was taken up. Windows did try being more like Apple, at which point Jobs promptly sued Gates.

Apple names its operating systems after mighty cats. Its earlier avatars have been named Cheetah, Puma, Jaguar, Panther, Tiger, Leopard and, of course, Snow Leopard (the version before Lion). Any guess as to what the next mystery cat will be?