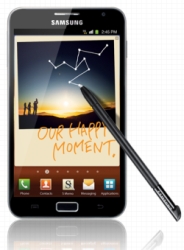 Samsung unveiled its latest smartphone offering during the IFA 2011 event in Berlin, Germany called 'Galaxy Note'. The device comes with a mammoth display screen of 5.3 inch (the largest offered till now by Samsung) and runs on the Android operating system.

Galaxy Note runs on a dual-core 1.4 GHz Exynos microprocessor with Mali-400MP graphics chip (which means it is going to be a powerhouse) and it has 1GB of RAM. The internal memory of the device is 16GB which can be extended up to 48GB with the help of a 32GB microSD card.

It comes with an 8 mega pixel rear camera with LED flash that can record full high definition (HD) videos (1080p) at 30 frames per second (fps). A 2 mega pixel front facing camera is also provided for video calling. The phone also has a new music player with SoundAlive feature (enhances audio) and a Stereo FM radio with RDS.

The dimensions of the device are 146.85mm x 82.95mm x 9.65mm and its weight is 178 grams. The device has a 2,500 mAh battery and comes with A-GPS with Glonass. The pricing and the availability of the device is not yet available, but don't be surprised if it burns a hole in your pocket.

For such a power packed smartphone, the pricing could easily exceed Rs 35,000.

The only mobile phone that comes even remotely close to this giant in terms of screen size is Dell Streak, which has a 5 inch display screen. But in terms of specifications, Galaxy Note comes out as the clear winner. Also, it has a 1.4 GHz dual core processor which will make the mobile phone fast (and I mean fast).

I think the biggest competitors of Galaxy Note will include mobile phones like HTC Sensation and the soon to be launched new iPhone from Apple.