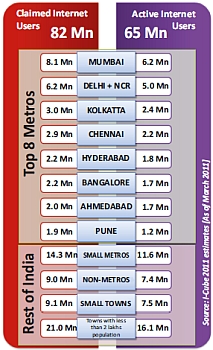 Home turned out to be the most favourite access point for Internet users in the country while the use of Cyber CafÃ© saw a major decline. Mobile phones also turned out to be a major contributor this year since 26.3million users accessed the Internet via their mobile phones.

Today, most of the telecom operators offer Internet at affordable prices to their customers that are spread across the country. This has also led to the increase in the use of Internet via mobile phones.

Also, although all three categories of youngsters are prominent, the number of school going kids that use the Internet today has been increasing substantially in the recent time. IAMAI believes that this is majorly due to the now existent e-learning services and education information available on the Internet.

Additionally, the frequency of use was also healthy since out of the 79million active Internet users, 87 per cent of users used the Internet at least once a week.