Top picks: A look at the smart gadgets showcased at CES 2013

The 2013 International Consumer Electronics Show (CES) is under way in Las Vegas, unveiling some tech wonders that will wow all. But if you are not able to keep track of it, here is a quick look at the top gadgets, showcased at the event.

Sony Mobile Communications has unveiled its new flagship Android smartphone called Xperia Z. The device sports a 5 inch, full high definition (1080x1920 pixel resolution) reality display with an amazing 441 pixels per inch, which brings Sony's TV expertise to the smartphone space. It will run on the Android 4.1 Jelly Bean operating system (upgradable to Android 4.2). The smartphone is powered by a 1.5 GHz Snapdragon S4 quad-core processor, has 2 GB of RAM and comes with 16 GB of internal memory.

Other key features include Sony's media applications â€“ Walkman, album and movies; one-touch functions enabling consumers to share music, photos and videos with an array of NFC-enabled Sony devices; battery 'Stamina Mode' for improving standby time at least four times by automatically shutting down battery-draining apps whenever the screen is off.

The smartphone measures 139mm x 71mm x 7.9mm and weighs 146g. The company also claims that the device is highly durable (with tempered glass and an anti-shatter film on the front and the back) and is dust and water-resistant.

Xperia Z will be launched globally in the first quarter of 2013. Also, in selected markets where Xperia Z is not available, a design variant of the smartphone called Xperia ZL will be released.

The company has been a busy bee at CES 2013 with not one or two but three big launches in the Ascend series. The first one, called Ascend Mate, has the largest smartphone screen till date. It has a 6.1 inch HD display (720x1280 pixel resolution) and is powered by a 1.5 GHz quad-core processor. The device runs on the Android 4.1 Jelly Bean OS and has a 4,050 mAh battery, which is pretty cool for a smartphone. 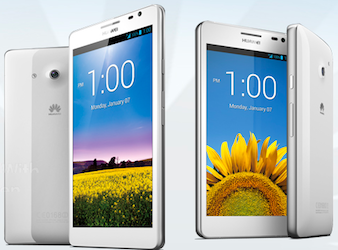 Interestingly, this device has a 13 MP auto-focus rear camera (much better than the Ascend Mate) with LED flash that can record full HD videos and a 1.3 MP front-facing camera that can also record HD videos. It measures 140mm x 71mm x 9.4 mm and the weight is 170g. It has a 3,000 mAh battery that the company claims will provide six days of stand-by time.

The smartphone will be available in pure white and crystal blue colours and going forward, the company will also launch a 4.7 inch display version.

Apart from these Android powerhouses, the company has also launched its first Microsoft Windows Phone 8 OS-based smartphone called Ascend W1. This device sports a 4 inch IPS LCD capacitive touchscreen display (480x800 pixel resolution) and is powered by a 1.2 GHz dual-core processor. The device runs on the Windows Phone 8 OS, has 512 MB of RAM and 4 GB of internal memory. 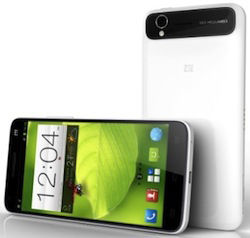 ZTE Corporation has announced another flagship handset belonging to its high-end Grand series and this one is called ZTE Grand S. The smartphone sports a 5 inch full HD (1080x1920 pixel resolution) capacitive touchscreen display (with 441 pixels per inch pixel density) and the company claims it is the world's thinnest, compared to other 5 inch full HD quad-core smartphones. The device is powered by a 1.7 GHz Qualcomm Snapdragon S4 Pro quad-core processor and runs on the Android 4.1 Jelly Bean OS. It has 2 GB of RAM and 16 GB of internal memory.

ZTE has also provided a 13 MP auto-focus rear camera (like Sony's Xperia Z) with LED flash and a 2 MP front-facing camera. Note that both the cameras can record full HD (1080p) videos. On the connectivity front, the device has Bluetooth 4.0, Wi-Fi, 3G, 4G LTE and a microUSB port. It measures 142mm x 69mm x 6.9mm and will be available in black and silver colours. 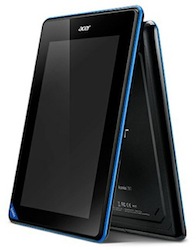 Acer has introduced a new tablet called Acer Iconia B1-A71. According to the company, the 7 inch device is ideal for first-time users or families opting for a second tablet for their kids. One look at the price and specifications, and we have to agree. The tablet runs on the Android 4.1 Jelly Bean operating system and will be available at a starting price less than $150 (Rs 8,235).

It sports a 7 inch WSVGA capacitive multi-touch touchscreen display (1,024x600 pixel resolution) and is powered by a 1.2 GHz Mediatek dual-core processor. The internal memory amounts to 8 GB, which can be expanded another 32 GB with a microSD card. 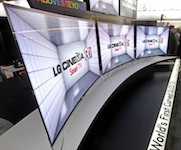 Apart from displaying an OLED TV with a curved screen, LG Electronics has also introduced a new feature, called Panorama Note, on the Optimus Vu II (the company's flagship handset). The new feature evolved from the analog philosophy of scribbling freely on a large canvas and enables users to create extra wide 3:1 ratio memos and drawings directly on smartphone displays. It also features 5.8 times zooming capability and easy navigation of the screen, both vertically and horizontally (via cursors).

Panasonic has unveiled a new tablet computer with a 20-inch IPS Alpha LCD screen that delivers '4k' resolution (3840x2560 pixel resolution), more than twice the horizontal and vertical resolutions of Full HD (1920x1080), and has a density of 230 pixels per inch. The device weighs 2.4 kg and is 10.8 mm (0.4 inch) thick, which is less than half-an-inch. It runs on the Windows 8 OS, comes with a high precision digital pen and will be targeted at the professional market. The company has also introduced two Toughpad tablets â€“ FZ-G1 and JT-B1 â€“ running on the Windows 8 and Android 4.2 Jelly bean operating systems, respectively.

ASUS has also come up with a two-in-one tablet that can run on two different operating systems, Windows 8 and Android 4.1 Jelly Bean. It is called Transformer AiO, sports an 18.4 inch screen and can function both as a tablet and a PC. As a standalone device, it runs on the Android OS and functions as a tablet, but when connected to its cradle, it switches to Windows 8 and turns into an all-in-one (AiO) PC. The company has also provided a handle at the back of the tablet for carrying it around, keeping in mind its large size.

That is all for now. But keep track of this space and we will bring you many more wonder gadgets from CES 2013.