In yet another M&A deal in the e-commerce space, online marketplace Tradus.com seems to have bought BuyThePrice.com (BTP), an e-com marketplace owned and operated by Hyderabad-based MyZingo eCommerce Service Pvt Ltd. Although the financials of the deal are not available yet, those visiting the BTP site are now redirected to BuyThePrice.Tradus.com. The development was first reported by MediaNama.

Also, a message on the site reads: Dear visitor, we are happy to inform you that BuyThePrice.com is now part of Tradus.com, India's leading marketplace. The entire BuyThePrice catalogue is now available on Tradus.com. Click here to visit Tradus.com or choose from the categories below.

Spokespersons of both the companies were not immediately available for comments, but watch this space for more details of the deal.

Interestingly, both the sites (Tradus and BuyThePrice) are backed by Naspers, a South Africa-based multinational group of media and e-commerce platforms, listed on the Johannesburg Stock Exchange. Tradus is part of the ibiboGroup, which operates a portfolio of internet businesses including travel site Goibibo.com, payments company Payu.in and auto classifieds site Gaadi.com, among others. The group was founded by Ashish Kashyap in 2007 and its key investors include Naspers and China's Tencent.

In February last year, Naspers, through its arm MIH, invested Rs 8.5 crore ($1.56 million) in BuyThePrice. The company has not disclosed that transaction yet, but sources close to the deal confirmed the development to Techcircle.in. Prior to that, BuyThePrice also raised an undisclosed amount in angel funding from Rajan Anandan, Rehan Yar Khan and Sunil Kalra (all of them are members of the Indian Angel Network) besides an unnamed individual.

Naspers also invested in the e-commerce major Flipkart, which is in the process of launching its own marketplace (the company has already started signing up vendors for the same). 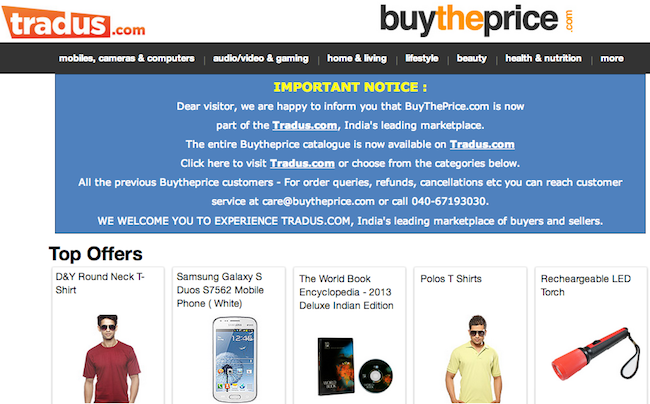 The company started off as an e-commerce site for consumer electronics and appliances, but later added a number of categories to its offerings. But last December, BuyThePrice completely changed its business model and became a 100 per cent marketplace, which means it is no longer holding any inventory. Instead, it had sellers on the site who were offering products to consumers.

At that time, BuyThePrice completely revamped its site and was offering around 30,000 products (with multiple offers on each product) from 300 sellers. Also, the site was getting around 1 lakh visitors on a daily basis, out of which 40,000-42,000 were unique visitors, and revenues were coming from transaction fees (charged for each transaction), as well as logistics fees if the sellers opted for that service.

Late last month, Tradus appointed Mudit Khosla as the chief executive officer of the company. Khosla joined Tradus.com from the e-commerce site Seventymm, where he was the CEO.

In September 2011, Snapdeal.com transitioned from an online deals site to a full-fledged horizontal e-commerce company via a marketplace model.

And most recently, Ahmedabad-based e-commerce firm Infibeam.com quietly pivoted from a pure-play e-commerce site to a hybrid venture (via a controlled marketplace), which means apart from selling products on its own, it will also allow other vendors to sell the same products with same or different pricing.