The Indian mobile handset market posted revenues of Rs 35,946 crore in FY13, a 14.7 per cent increase from Rs 31,330 crore in FY12. The growth was primarily led by the increase in uptake of smartphones by Indian consumers, according to Voice&Data Survey of Indian Mobile Handsets Market 2012-13. The 18th annual survey covered over 30 mobile handset companies (both multi-national and Indian mobile phone firms) doing business in India- across categories like feature phones, multimedia phones, enterprise phones as well as smartphones.

The rise & rise of Samsung

The biggest upset of the year was the dethroning of Finnish handset maker Nokia from the top spot by Korean electronics maker Samsung. Nokia had been holding its number one spot for over a decade, but the former king of Indian mobile phone market dropped a rank to be placed at number two with 27.2 per cent market share. The company also witnessed a significant drop in revenues (18 per cent to be exact). Check the table below to view the market share of all the top players.

Samsung became the market leader with 31.5 per cent market share. The company's rise in the Indian market is attributed to its rich product portfolio that was able to cater to customers of all budget categories. The company offers handsets in all price ranges, from as low as Rs 1,500 to upwards of Rs 40,000. The fact that the handsets come in varied screen sizes also worked for the company. These two factors helped the company in grabbing customer's attention, besides the product quality and new features.

Where did Nokia fail? 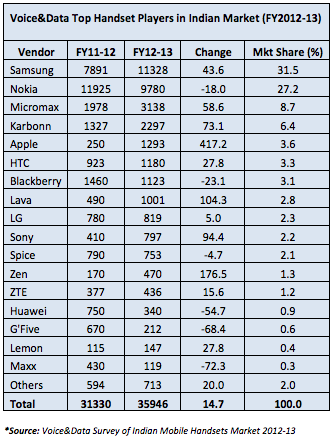 In the 12 months ended March 2013, Nokia revenues from Indian operations were placed at Rs 9,780 crore, in comparison  to Rs 11,925 crore in FY12. Nokia's drop in market share started when the company failed to sense the need of a dual-SIM phone for Indian consumer. The same need was tapped into and served by the Indian players years ahead of Nokia finally launching dual-SIM devices in the country.

In addition, on a global ground, not embracing the most popular (and most accepted) operating system (Android) for its smartphones also gave potential Nokia customers very little choice. Also, while the company's Lumia series smartphones witnessed huge growth globally in their initial phases, they could not draw much attention of the Indian consumers.

Although homegrown handset company Micromax performed pretty badly in FY12 and the first quarter of FY13, the Gurgaon headquartered phone maker grew by 58.6 per cent and by the end of the last fiscal, posted revenues of Rs 3,138 crore compared to Rs 1,978 crore in FY12.

In contrast, Karbonn Mobiles was the only company among the Indian handset players that grew most consistently. In FY13, Karbonn grew by 73.1 per cent to register revenues of Rs 2,297 crore compared to Rs 1,327 crore in FY12, in the process improving its ranking to number four from five in the previous year.

"The rise of smaller local players like Micromax, Karbon, Lava, and Zen is a clear indication that consumers want cheaper feature rich phones. The next phase of mobile penetration in the bottom of the pyramid India will be driven by these companies," said Ibrahim Ahmad, group editor of Voice&Data.

Apple's entry in the top 5

The most exciting entry into the top 5 was that of the Cupertino-based giant Apple. The company grew an insane 417.2 per cent to post revenues of Rs 1,293 crore in FY13, compared to Rs 250 crore a year back. While India was never a focus market for the Apple till Steve Jobs' era, in the last two years Apple has started making inroads into the market, though slowly.

In the last fiscal, the company made some disruptive changes in its sales strategy that paid off. Some of these included appointing Ingram Micro and Redington as the national distributors for Apple's entire sales, and offering EMI schemes to the consumers for purchasing the iPhone. The company now enjoys 3.6 per cent market share in India and completes the top 5. Interestingly, but not surprisingly, Apple has achieved all this with the smallest number of handset models in its portfolio.