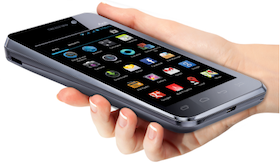 Homegrown hardware manufacturer iBall has added yet another smartphone offering to its portfolio. The new device, called Andi 4a Projector, runs on the Android operating system, but its highlight is its in-built projector. The smartphone comes with a 35 Lumens projector, which the company claims can deliver VGA (640X480 pixels resolution) video output up to a distance of 8 to 10 feet. Here is a look at the specifications of the device.

Andi 4a Projector has a 4 inch IPS WVGA capacitive touchscreen display with 233 ppi pixel density, and runs on the Android 4.1 Jelly Bean operating system. It is powered by a 1 GHz dual-core Cortex A9 processor and has 512MB of RAM. In terms of internal memory, users get 4GB of internal storage (approximately 2GB available to the user) that can be further expanded an additional 32GB with a microSD card.

The smartphone packs an 8 megapixel auto-focus camera with LED flash that can record videos and a front facing VGA for video calling. On the connectivity front, the device has Bluetooth, Wi-Fi, and 3G and it also comes with a microSD card slot. The device has a 1,500 mAh battery. The exact dimensions and weight of the device were not provided at the time, but it will be available in black colour and will come with GPS (with A-GPS support). 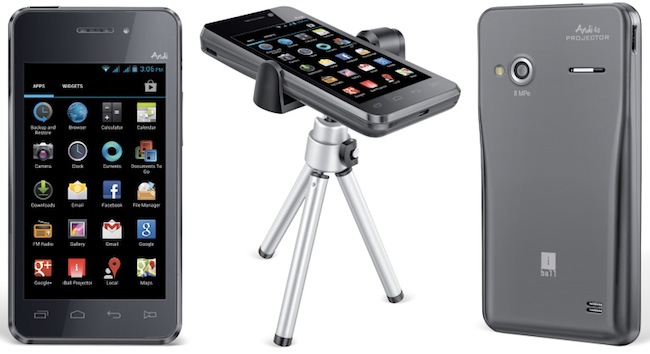 While adding a projector is an interesting move, this is not the first time it has been done. Early last year, Samsung had also launched its own projector phone called Galaxy Beam. The device has a 4 inch Super AMOLED capacitive touchscreen and also came with an in-built projector that can project 50 inch wide high definition images. However, it did not find many takers, considering its bizarre pricing of Rs 29,900. While iBall's offering has been priced much lower, we feel it is still too high to entice customers to make a purchase for an iBall product.