Moto E being launched in India; coming exclusively on Flipkart.com for Rs 6,999 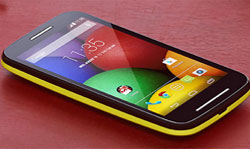 Motorola has announced the launch of Moto E, the new economical model of Moto series of smartphones. The smartphone will be available exclusively on Flipkart.com in the Indian market starting tomorrow at a price of Rs 6,999. Moto E will be available in black and white colours, as well as swappable back covers and grip shells.

"Moto E is designed for buyers who are price sensitive and those who have not been able to experience the internet on their feature phones," said Magnus Ahlqvist, corporate vice president - Asia Pacific, Motorola Mobility.

Moto E has a 4.3-inch display with 960x540 pixels resolution, making it the only smartphone offering a high quality display at this price point. The dual-SIM smartphone runs on the latest Android 4.4 (KitKat) OS, and Motorola has promised that it will upgrade the smartphone to the next major version of Android. It packs a 1.2GHz dual-core Snapdragon 200 processor, with 1GB RAM and 4GB internal storage. Unlike Moto X and G, this phone supports microSD cards for further storage expansion.

The budget offering of Motorola sports a 5MP camera on the back, but does not have rear LED flash and front camera. Users can access the internet over 2G, 3G and Wi-Fi networks, while data can be transferred via microUSB port and Bluetooth 4.0. The smartphone has a decent 1,980mAh battery and Motorola claims it can last a whole day once fully charged. The company has used a nano-coating that will make the smartphone resistant to splashes, so that it does not get damaged in rain.