Although the break-up of the funding amount was not disclosed, one source said Myriad invested approximately Rs 133 crore or ($22.8 million) as part of the seven investors consortium.

"We are pleased to welcome several marquee global investors as our partners and believe their association will contribute to Snapdeal's long-term success. Our mobile and internet commerce marketplace is now connecting millions of buyers to a very large base of sellers that offer products and services of national and international brands. We will continue to focus on creating life changing experiences for the buyers as well as sellers in the Snapdeal ecosystem," Snapdeal's co-founder and CEO Kunal Bahl said.

Snapdeal was started as a pure online deals site and later it pivoted to a full-fledged horizontal e-commerce company via a marketplace model in September 2011. Last month, the firm acquired Doozton.com, a curated and socially-nurtured fashion shop that offers hand-picked fashion-finds and seeks to help people make better shopping decisions and discover fitting apparel. This came exactly a year after the firm snapped Shopo.in for an undisclosed amount.

In a recent interview with The Hindu Business Line, Kunal Bahl said that Snapdeal is considering two more acquisitions in the Indian technology space. Snapdeal is also targeting a US public float in 12-24 months. 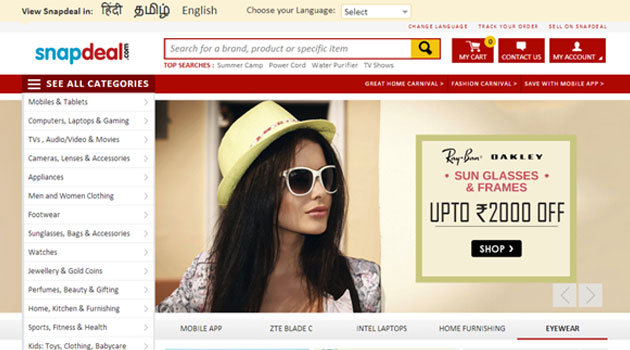 The funding takes Snapdeal a step closer to Flipkart

The latest investment is taking Snapdeal a step closer to its arch rival and the largest e-commerce player in India Flipkart.com, in terms of funding. In October last year, Flipkart.com had raised an additional $160 million in the fifth round of funding started in July last year, from new investors including Belgium-based Sofina, US-based Morgan Stanley Investment Management, Dragoneer Investment Group and Vulcan Capital (founded by Microsoft co-founder Paul Allen), along with participation from existing investor Tiger Global.

Flipkart Pvt Ltd, a Singapore-based holding firm, had previously raised $200 million from existing investors Naspers Group, Accel Partners, ICONIQ Capital, and Tiger Global in the first tranche of the group's fifth round of external funding. This was just three months ago and with the second phase, the total capital raised from the fifth round reached $360 million, which is the single-largest amount to be raised by any Indian internet business ever. The fresh funding took the total funding for Flipkart so far to over $540 million.

The other big player that Snapdeal is competing in India is Amazon.in, the marketplace launched in India by Amazon Seller Services Pvt Ltd, part of the world's largest e-commerce firm Amazon.com.