It was just waiting to happen. After Flipkart announced its $1 billion fundraising and Amazon went one up by committing $2 billion investment in India, Delhi-based Jasper Infotech Pvt Ltd, which runs the online marketplace Snapdeal.com, has asked its financial advisor Credit Suisse to scout for $300 million from private equity investors, sources privy with the development told Techcircle.in.

Previously media reports citing sources had suggested the firm is looking to go public within a year and had mandated Credit Suisse and Goldman Sachs to prepare groundwork for the same. Snapdeal co-founder Kunal Bahl had recently said it is targeting a US public float in 12-24 months.

"Snapdeal will raise a few more rounds of funding before going public," said a source.

Although Snapdeal has raised $233 million in two rounds since January this year, the big announcements by Flipkart and Amazon have raised the stakes in the e-commerce game.

Text message sent to Credit Suisse spokesperson in the region did not immediately elicit a response.

The company has recently roped in Abhishek Kumar of Palaash Ventures to look after M&As and investments.

Prior to that, the company had raised $133.77 million led by existing investor eBay Inc early this year. So far, Snapdeal has raised $320 million. 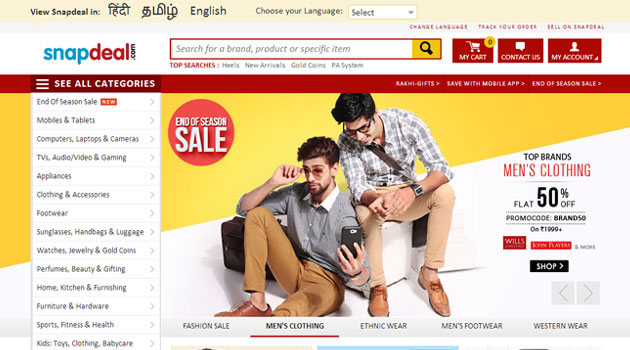 PremjiInvest is now a common investor in Snapdeal and Flipkart after the latter acquired Myntra, a firm in which PremjiInvest had put in money recently.

Snapdeal was started as a pure online deals site and later it pivoted to a full-fledged horizontal e-commerce company via a marketplace model in September 2011. Early this year, the firm acquired Doozton.com, a curated and socially-nurtured fashion shop that offers hand-picked fashion-finds and seeks to help people make better shopping decisions and discover fitting apparel. This came exactly a year after the firm snapped Shopo.in for an undisclosed amount.

In a recent interview with The Hindu Business Line, Bahl said that Snapdeal is considering two more acquisitions in the Indian technology space.