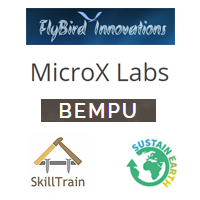 Based out of Chennai, Villgro funds and incubates early-stage, innovation-based, for-profit social enterprises that have significant impact on the lives of India's poor. It has so far supported 103 enterprises since it started in 2001, and claims to have generated 4,000 jobs. In September this year, Villgro invested in three companies, namely Scholowiz, Aindra Systems and Healthypariwar.

Here is a quick look at the seven new ventures:

Kamal Kisan: Founded by Devi Murthy and Karan Patel, the startup is developing a range of agricultural implements, including a mini rice mill, sugar cane planter and rice transplanter that bring the productivity advantages of mechanisation to small farmers.

VectorDoc: Launched by Vincent TP, the firm is developing an artificial intelligence-based mobile phone app that is intended to be used by a low-skill resource to both triage and return a preliminary diagnosis with high accuracy.

MicroX Labs: Founded by Prakhar Jain, MicroX has developed a device to tackle the issue of providing accurate blood tests at point of care, which will assist physicians with a quick and efficient diagnosis of a variety of diseases.

BEMPU: The startup, founded by Ratul Narain, is developing an intuitive neonatal temperature monitor that empowers mothers or other caretakers to better manage their newborn's temperature.

SustainEarth: Set up by the trio of Koushik Yanamandram, Shankar Ramakrishnan, and Piyush Sohani, the startup has developed a low-cost biogas plant for household use in rural communities. This converts animal waste into clean fuel solutions integrating issues of livelihoods and energy.

SkillTrain: It was launched by B Ganesh. The startup uses audio-, video- and simulation-based learning material for learners to understand and practise vocational skills.

Villgro funds and incubates early-stage, innovation-based, for-profit social enterprises that have significant impact on the lives of India's poor.