The funds will primarily be used to build operational capacity and technology, as well as for expanding the product and service offerings.

This is Velos' first investment in India. Saverin had earlier told VCCircle.com that Velos will provide growth capital to companies focused on retail innovation, health & wellness and luxury & entertainment.

"The company stood   out   to   me   as   a   remarkable   investment   opportunity- bringing   together   Indian   innovation,  global  best  practices  and  the  prospect  for  both  significant  domestic growth,   as   well   as   international expansion," Ganguly added.

Hopscotch was founded by Rahul Anand and Lisa Kennedy. Anand holds an MBA from Harvard Business School and a BS in Mechanical Engineering from University of Michigan. Prior to setting up the startup, Anand was director of Diapers.com, which was acquired by Amazon in 2011. Earlier, he had worked at companies like Skanan Ltd, Dell, Optiant and Honeywell Aerospace. 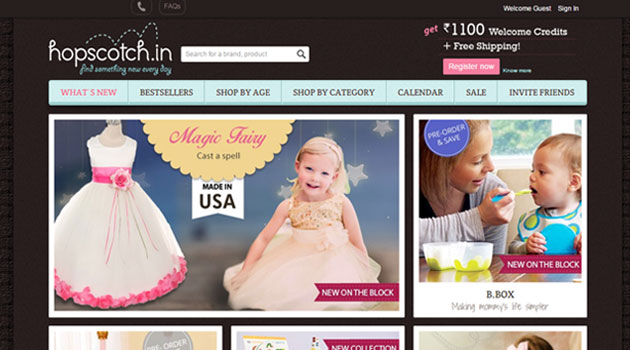 Hopscotch offers baby and kids' products, including apparel, shoes, toys & books, and moms & maternity products. The firm claims that unlike traditional online stores, it introduces new limited-time boutiques every day. What this means is that each brand's collection (a boutique) is open and available for only a fixed period of time—from a few hours to four-five days. The firm claims it is working with hundreds of brands from all over the world.

In its vertical, the company competes with two significant VC-backed ventures—FirstCry and Babyoye. Last year, Pune-based FirstCry had raised $15 million led by Vertex Venture Holdings, a venture investment arm of Singapore's sovereign wealth fund Temasek. The firm has raised a total of $33 million to date, which is more than double the amount raised by Hopscotch.

The latest investment in Hopscotch comes at a time when the baby and kids product vertical has been going through a consolidation phase. Kalaari Capital-backed Hushbabies shut down and Hoopos merged with Babyoye, which has been struggling to raise fresh capital. The firm had raised a total of $15 million from Accel Partners, Helion Venture Partners and Tiger Global.

Hopscotch also faces competition from horizontal e-commerce players like Amazon, Flipkart and Snapdeal, among others.