After unveiling the same at Consumer Electronics Show (CES) 2015 event earlier this month, Lenovo has now launched its A6000 smartphone in the Indian market. The device sports a 5 inch display and runs on the Android operating system. Priced at Rs 6,999, it is arguably the cheapest 4G LTE smartphone available in the country as of now.

Following in the footsteps of Chinese smartphone manufacturer Xiaomi, Lenovo is also using an online only flash sales model for selling the device in the country. The company has entered into an exclusive partnership with Indian e-commerce major Flipkart.com, and will make A6000 available for purchase on Jan 28, 2015 (registering for the sale is mandatory).

In addition, Sony has also launched its latest SmartWear line in the country. Christened SmartBand Talk and SmartWatch 3, the devices are available for purchase for Rs 12,990 and Rs 19,990 respectively. Both the devices were first unveiled by the company at IFA 2014, a consumer electronics show, in September last year.

The smartphone has a 5 inch IPS HD capacitive touchscreen display (1280Ã—720 pixels resolution) with 294 ppi pixel density and runs on the Android 4.4.2 KitKat operating system. It is powered by a 1.2 GHz Qualcomm Snapdragon MSM8916 quad-core processor and has 1GB of RAM. The internal memory of the device is 8GB that can be further expanded up to 32GB with a microSD card.

A6000 comes with an 8 megapixel auto focus rear camera with LED Flash that can also record videos, and a 2MP front-facing camera for video calling. On the connectivity front, the device has Bluetooth 4.0, Wi-Fi, 3G, and 4G LTE, as well as a microSD card slot and a microUSB port. The dimensions of the device are 141mm x 70mm x 8.2mm and its weight is 128 gm. Lenovo has provided a 2,300 mAh battery in the device, which also comes with GPS (with A-GPS support) and dual-SIM capability. It is available in black colour. 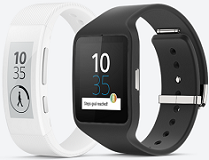 Available either pre-loaded or downloadable from the Google Play Store, Sony's 'Lifelog' application enables you to set and achieve goals, bookmark memorable moments, and revisit memories any time. The devices launched by Sony that are compatible with Lifelog include SmartBand Talk and SmartWatch 3.

It features a curved 1.4 inch e-paper display that provides you with always-on updates of your Lifelog activities, notifications and time. A built-in microphone and speaker, combined with a short call function, lets you talk into it and hear your caller. You can also assign your own sounds to life bookmarks and use your voice to carry out specific smartphone operations.

It has been specifically designed for the latest Android Wear updates in close collaboration with Google. It organises your information, suggests what you need, and shows it to you before you even ask. SmartWatch 3 sports a 1.6 inch transflective display (320Ã—320 pixel resolution) that is set within a stainless steel core unit.

Both the devices are available in black colour as of now.