Mumbai and Singapore-based The Aleph Group PTE Ltd, the company behind Culture Machine, a startup that creates digital video programmes for 'the internet generation', has raised $18 million in Series B funding from Tiger Global, Times Internet and existing investor Zodius Capital, as per a company statement.

VCCircle was the first to report earlier this week that Culture Machine is in talks to raise funding from Tiger Global and Zodius.

As per the deal, Chris LaRosa, former product head of You Tube Music, has joined the board of the company. 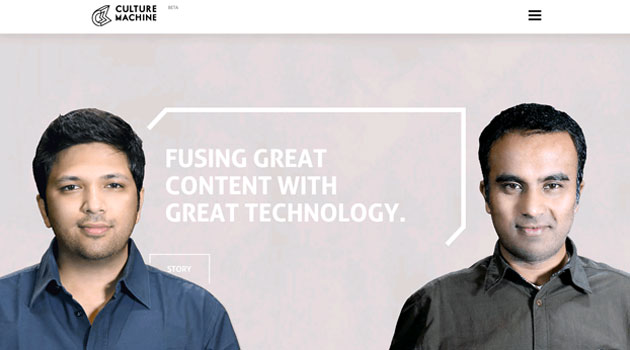 Culture Machine was founded in 2013 by Sameer Pitalwalla, former director of Walt Disney India, and Venkat Prasad, former product manager at YouTube. The startup optimises one's digital and analog presence to grow his/her YouTube channels via collaboration with creators and their fans, besides helping him/her build an audience. The firm claims that it helps clients create, execute and deliver content by identifying the right programming strategy for their audience.

"In a multi-screen, multi-platform world where content is personalised and social is the new distribution, creating targeted content for global communities at scale is a challenge. We are building a company that uses our proprietary technology platforms, to know what content to create and create that content at scale," Pitalwalla and Prasad, co-founders, Culture Machine, said in a joint statement.

As of September last year, the company claimed to have 40 million monthly views with over 80 million minutes of content consumed with almost 55-60 per cent of the consumption happening on mobile phones.

Its network allows creators across music, comedy, fashion, lifestyle and kids to help grow their channels and create video programming using its production facilities in Mumbai and Chennai.

The company had earlier added Shishir Mehrotra, former vice president of product at YouTube/Video at Google; Dean Gilbert, former vice-president and global head of content operations at YouTube and Nickhil Jakatdar, chief executive officer VuClip, to its board of advisors.

Currently, the company employs 65 people across its offices and studios in Mumbai, Pune, Chennai, Singapore and California.

Founded in 2001, Tiger Global invests in sectors across internet, technology, telecommunications and media with a focus on the US, China, India, Southeast Asia, Latin America and Eastern Europe. It is a more than $2.5 billion fund and is one of the largest investors in Indian tech firms with investments in companies like Flipkart, Olacabs, Just Dial, MakeMyTrip, Commonfloor, Caratlane, Freshdesk, Babyoye, Zovi, Hike, CarTrade, LimeRoad, Grey Orange and PolicyBazaar.

YoBoHo New Media is another company operating in the digital video space that focuses on creating entertainment content for children.