Instant messaging and mobile calling application firm Nimbuzz has launched an anonymous dating app. Called Masque, the app lets its users find, flirt and hook-up with others based on their location, age and gender. Besides basic messaging, the app also enables users to send stickers and emoji, and share self-destructive pictures, videos as well as audio messages.

Available on the iOS, Android and Windows Phone platforms, the app allows users to create a profile with a nickname and avatar, and initiate a new conversation by hitting the '+' button- post which the app starts matching users. Masque lets users chat with multiple matches at the same time.

Also, the self-destructive videos, photos or audio messages sent by users are deleted irrecoverably once their recipients have viewed/listened to them.

Nimbuzz was founded in 2008 by IIT-alumni Vikas Saxena, who had previously worked at companies like Deutsche Telekom, Bharati Airtel and Aircel. According to the company, it is in the process of developing and launching a series of mobile apps including social messaging, anonymous chat, and micro-money transfer. 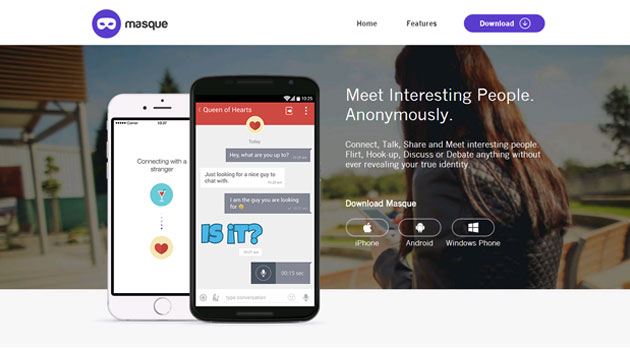 There are several online dating apps, many of which have gained a lot of investor interest in the recent past. Recently, matchmaking site Aisle raised $100,000 in seed funding from angel investors. Last month, Delhi & Singapore-based Thrill Pte Ltd, a mobile dating startup which runs its apps on Android and iOS platforms under the Thrill banner, raised an undisclosed amount from People Group, which owns matrimonial portal Shaadi.com, for a significant minority stake.