Within a fortnight of unveiling the successor to Moto E, Motorola has now launched the smartphone in the Indian market. Called Moto E (2nd Gen), the device sports a slightly bigger 4.5 inch display, twice the internal storage, and runs on the latest, unadulterated version of Android. The 3G version of the smartphone will go on sale tomorrow exclusively on Indian e-commerce major Flipkart.com for Rs 6,999.

Details on the availability or the India pricing for the 4G LTE variant of Moto E (2nd Gen) is not available as of now.

In addition, Taiwanese network devices manufacturer D-Link has also unveiled its first Android tablet in the country. Christened D-Link D100, the tablet sports a 7.85 inch display and also offers voice calling. While the company is yet to officially launch the tablet, is available for purchase on a number of e-commerce sites (like Snapdeal.com, Flipkart.com and eBay India) for Rs 13,449 in the country.

On the connectivity front, the device has Bluetooth 4.0, Wi-Fi, 3G and 4G LTE (depending on the region), as well as a microUSB port and a microSD card slot. The dimensions of the device are 129.9mm x 66.8mm x 5.2-12.3mm (curve design) and its weight is 145 gm. Motorola has provided a 2,390 mAh battery in the device that it claims will provide up to 24 hours of mixed usage. It has GPS (with A-GPS support), and will be available in black and white colours. Read here for more. 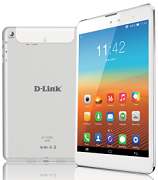 The tablet has a 7.85 inch IPS LCD capacitive touchscreen display (1024Ã—768 pixels resolution) and runs on the Android 4.4.2 KitKat operating system. It is powered by a 1.3 GHz quad-core processor and has 1GB of RAM. The internal memory of the device is 16GB that can be further expanded up to 32GB with a microSD card.

D100 comes with a 5 megapixel rear camera that can also record videos, and a 2MP front facing camera for video calling. On the connectivity front, the device has Bluetooth 3.0, Wi-Fi, and 3G, as well as a microSD card slot and a microUSB port.

D-Link has provided a 4,000 mAh battery in the device, which also comes with GPS (with A-GPS support) and FM radio. The tablet also offers phone functionality, enabling users to make voice calls with 3G support through a SIM card slot. It is available in pearl white colour.

Considering the average specifications of the tablet, we feel that an under Rs 10,000 pricing from the company would have made more sense. Especially since users can get their hands on tablets with similar (or better) specifications from the likes of Micromax, Lenovo, and iBall etc. for much cheaper in the country.