Excl: SaaS-based CRM firm Capillary in talks to raise $80M from Temasek, others

"As a matter of policy, Temasek does not comment on market speculation and rumours," a Temasek spokesperson told Techcircle.in.

An email sent to Capillary's co-founder and CEO Aneesh Reddy to know more about the investment did not elicit a response till the time of filing this article.

Capillary was set up in August 2008 by IIT Kharagpur alumni Reddy, Krishna Mehra and Ajay Modani. It is into cloud-based software solutions that help retailers engage with customers through mobile, social and in-store channels. The firm claims that its integrated marketing platform helps retailers easily manage their customer data, gain insights and personalise engagement across multiple channels. 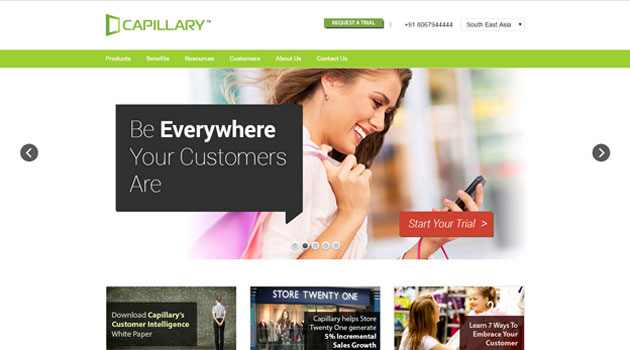 The company caters primarily to the clients in the retail market, and as of July last year, 40 per cent of its revenues came from apparel, fashion and shoes; 30 per cent from food retail; 20 per cent from white goods and electronics and remaining 10 per cent from pharmacies and hypermarkets. During the same time, it claimed its platform was powering more than 150 brands across 10,000 retail locations. Its clients include Pizza Hut, Benetton, KFC, Puma, Marks & Spencer and Lacoste.

In July 2014, Capillary had raised $14 million in its Series B round of funding led by existing investors Sequoia Capital and Norwest Venture Partners (NVP). This round came barely five months after the firm netted $4.5 million in funding from American Express Ventures.

This was preceded by a $17 million in its Series A round of funding from Sequoia, NVP and Qualcomm Ventures in 2012.

Incubated by IIT Kharagpur with a soft loan of Rs 15 lakh, Capillary had raised its first round of angel funding from Harminder Sahni, Naresh Malhotra and Qualcomm ($100,000 as the winner of QPrize). In January 2011, it raised a second round from Sahni and Malhotra besides new investors Rajan Anandan and Venkat Tadanki, along with a few others. The company had paid back the incubation loan to IIT Kharagpur in February 2011, after it became profitable in mid-2010.

Capillary has offices in India (Delhi, Bangalore and Mumbai), Singapore, the UAE (Dubai), the UK (London), the US (California), and South Africa (Johannesburg).

The investment includes both a primary issue where Manthan gets fresh financial resource as well as a secondary component where one of the three existing investors IDG Ventures has exited from the company. Another existing investor Fidelity has partially exited. Although this deal apparently happened in December 2014 itself, since then Temasek has also signed agreements to buy stake in Medanta and Silicon Valley Bank's Indian venture debt arm.