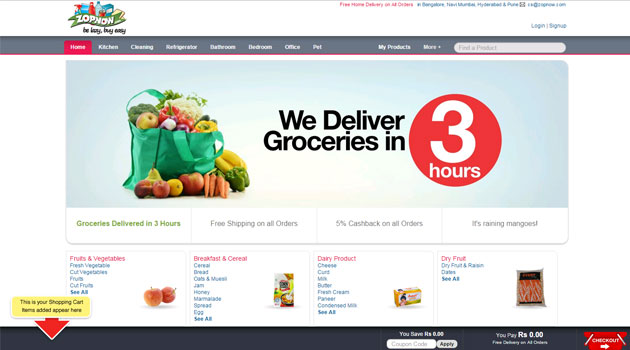 Bangalore-based ZN Retail Pvt Ltd, which runs online grocery property ZopNow, has raised $10 million (Rs 62 crore) in a fresh round of funding led by San Francisco-based Dragoneer Investment Group with participation from the existing investors Accel Partners, Qualcomm Ventures and Times Internet, according to a report in The Economic Times citing the company's co-founder and CEO.

The report said the startup has been valued at over $50 million with the latest funding.

For Dragoneer, which backed Flipkart last year, this comes as the second back-to-back investment in India after investing in Teabox, an online retailer of specialty tea, last month.

Having started in its home city, ZopNow later expanded to Navi Mumbai, Hyderabad and Pune. The money will be used to expand to 15 other cities, the report said, adding that some of it will also be used to hire people and enhance the technology, Mukesh Singh, CEO of ZopNow told the newspaper.

He added that the firm is looking to pursue a new business model where it ties with offline retailers instead of stocking its own inventory to expand across India.

ZopNow had last year tied with hypermarket chain Hypercity for such an initiative.

Singh said the firm is eyeing such partnerships with retailers of apparel and other categories. He did not clarify if ZopNow would then become a horizontal marketplace against its current focus on grocery.

ZN Retail had last year launched a separate site ShopStr for selling smartphones. The site is not active currently.

An email sent to the firm for more clarity on the developments, did not elicit a response.

ZopNow was co-founded in 2011 by Mukesh Singh, an alumnus of Massachusetts Institute of Technology and IIT Kanpur and Bal Krishn Birla, an IIT Kanpur alumnus. Two years ago, Birla exited and claimed that he was wrongly ousted from the company. Birla then launched A Dal B Dal, an online platform to exchange antique items such as old books, mobiles, clothes, stamps and coins.

ZopNow had raised $2 million from Accel Partners, Qualcomm Ventures and Times Internet in 2012.

The online grocery space has seen quite a bit of activity in the last six months. BigBasket raised Rs 200 crore last September, EkStop was acquired by Godrej Nature's Basket and Amazon joined hands with kirana shops to link consumers with local grocers through its online marketplace.

Among others, LocalBanya raised fresh private funding and Gurgaon-based logistics services startup Grofers, which essentially enables pick-up and delivery of products from neighbourhood stores, raised $10 million (Rs 62 crore) in its Series A round of funding from Tiger Global and existing investor Sequoia.