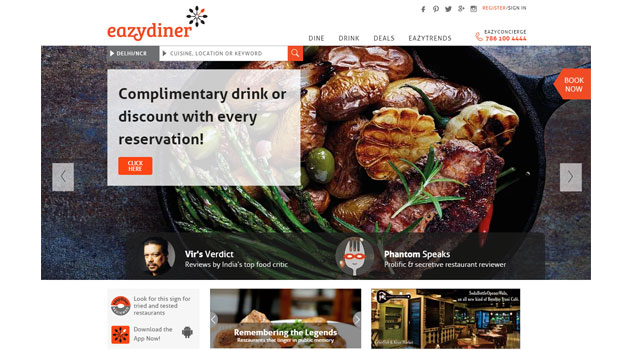 EazyDiner Pvt Ltd, a restaurant reservation platform launched by journalist, food writer and TV host Vir Sanghvi, along with a group of hoteliers and restaurateurs, has raised its first round of funding led by angel investor and DSG Consumer Partners' managing director Deepak Shahdadpuri and former managing director with ChrysCapital, Gulpreet Kohli, it said on Thursday.

EazyDiner is a dining platform that offers reviews, recommendations, insiders' tips, dining concierge services and deals with every reservation. The service delivery is both over phone and online.

"EazyDiner is a way of helping diners make the right choices and putting restaurants in touch with the modern Indian diner," Sanghvi said.

Founded in late 2014, EazyDiner is currently operational in Delhi NCR region with over 8,000 restaurant listings with menus and has close to 300 restaurants for online reservations.

Besides services on the phone, its Android app is already live and the firm expects to launch its iOS app next month.

It plans to launch its services in Mumbai by July with listing of over 7,500 restaurants in addition to 500 partner restaurants where it will offer online reservations and exclusive deals. EazyDiner will roll out operations in Bangalore, Hyderabad, Pune and Chennai within this year.

"The F&B sector in India has been relatively slow to adopt new technologies, in tandem with the change in eating habits, lifestyle trends and consumer behaviour. EazyDiner is a platform that serves the needs of both the restaurants and diners," Deepak Shahdadpuri, managing director at DSG Consumer Partners, said.

For Gulpreet Kohli, this is the first known private investment after he quit ChrysCap, one of the top home-grown private equity firms in the country.

The startup earns revenue by charging a reservation fee to the restaurant where the diner goes, and from the restaurant advertisements which are on the website. The company expects to be profitable by the end of this year itself.

There are a bunch of startups which are offering similar services like EazyDiner but most of them offer one or the other service while EazyDiner claims to provide an integrated offering. Some of these other ventures have also got funding or became part of a larger firm.

Formerly known as GourmetItUp, WowTables had secured Rs 1.81 crore (under $300,000) in funding from a group of investors, including Karan Bhagat, managing director of IIFL Private Wealth Management; Prabhat Awasthi, managing director of Nomura Holdings; and Atul Kumar of Genome Capital, in October last. It partners with fine-dining restaurants to create exclusive dining experiences like set meals, wine tastings and bespoke menus. These experiences are available on the site as well as through concierge services.

Another property is DineOut, which was acquired by Times Internet Ltd's listing service TimesCitylast year.

Zomato, the largest restaurant listing service in India, has just acquired a US-based table booking service startup and is preparing to launch the service in other markets, including India.