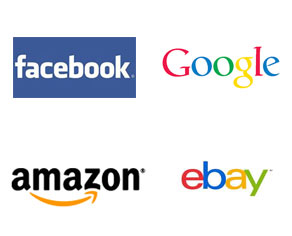 The social media behemoth posted a revenue of $3.54 billion in the first quarter of the current financial year, lower than the street expectations and slowest in the last two years. Total revenue from advertising stood at $3.32 billion, up 46 percent from a year earlier.

Its net income declined to $512 million as against $642 million the year-ago period.

Mobile ad business continued to drive Facebook's business in the quarter ended on March 31, 2015 with 73 per cent of the social network's total advertising revenue in the quarter, up from 69 per cent at the end of the 2014.

As on March 2015, the social network major had 1.44 billion monthly active users, up 13 per cent from a year earlier. Its daily active users are closing to the 1 billion mark and reached 936 million last quarter.

India, Brazil and US representing key drivers of user stats.

The search giant Google Inc clocked a higher net revenue, which excludes payments to the company's advertising partners, of $13.9 billion in the first quarter as against $12.2 billion in the year-ago period, as rising online ad volume offset a hit from strong dollar.

The technology giant generates over 55 per cent of its revenue outside the US. It said in the statement that revenue would have grown 17 per cent, if it weren't for the dollar's rising value during the period.

The profit of the company, excluding the cost of stock options and related tax benefits, was at $6.57 a share, compared with $6.27 a year ago. Analysts had expected $6.63 a share.

Amazon, now pushed down as the second largest e-commerce firm in the world, posted an increase of 15 per cent in its net sales to $22.72 billion in the quarter, on the back of rising sales in North America and its growing cloud-computing services unit.

For the first time, the e-commerce giant broke out numbers for Amazon Web Services (AWS), the cloud computing division. AWS registered net sales of $1.57 billion in the quarter ended on March 31, 2015, an increase of 49 per cent from $1.05 billion in the first quarter of 2014.

In the quarter, the operating income rose 74 per cent to $255 million but it sported net loss of $57 million as against net income of $108 million in the first quarter 2014.

E-commerce marketplace eBay also surprised the market posting a higher than expected quarterly net income of $626 million for the quarter ended March 31 as against a loss in the year-ago period.

Net revenue of the company in the first quarter increased 4.4 per cent to $4.45 billion, on the back of strong growth from its payments business that includes PayPal, which is due to be spun off from the company in the third quarter.

Revenue from eBay's payments business grew to $2.11 billion, an increase of 14 per cent in the first quarter, from the year ago period, accounting for nearly half of its total revenue.