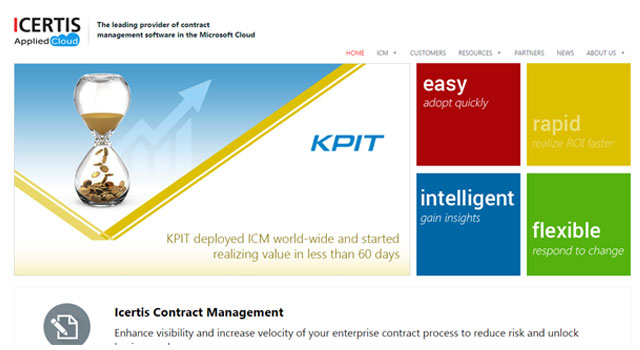 Icertis Inc, a cloud enterprise software startup led by IT industry veteran Samir Bodas, has secured $6 million in a Series A round led by Greycroft Partners and Fidelity Growth Partners India.

The new funding will enable the company to scale up sales and marketing and build out its contract lifecycle management product. Born as a Microsoft cloud software startup, Icertis raised a seed round in 2012, and has seen multi-fold year-over-year customer and revenue growth for the last two years.

It is headquartered in Bellevue, the US, with its operations centre in Pune, India. It also has an office in Mumbai.

Its flagship product Icertis Contract Management (ICM) has capabilities to manage sell-side, buy-side and corporate contracts on one platform.

"ICM ensures CXOs are able to manage contracting risk and have full end-to-end visibility of contracts, while at the same time enable employees to contract with customers, partners and vendors in a self-service mode, within guard rails, and engage the right specialist resources, like legal and finance, only to manage exceptions and critical issues," Samir Bodas, co-founder and CEO of Icertis, said.

Bodas started his career at McKinsey and Co and then spent several years at Microsoft. Before co-founding Icertis in 2009, Bodas served as president and CEO of Aztecsoft, which was acquired by IT services company Mindtree. He had taken over as CEO of Disha Technologies in 2003, where he grew the business five-fold and managed its acquisition by Aztecsoft in 2005.

Last week, Icertis announced its plans to spin off its cloud solutions and services business into a new company called CloudMoyo. The company will be focused on cloud and data analytics-based ERP-surround enterprise solutions for the high tech, life sciences and transportation industry verticals. Manish Kedia will serve as CEO and president of CloudMoyo.

"Though the company is young, Icertis has an impressive list of customers, including Microsoft, Roche, Hyundai HATA, Chemonics, and SunEdison. We were also impressed by the quality of its product, team and ability to execute," said Mark Terbeek, partner at Greycroft Partners. "Contract Lifecycle Management is a multi-billion dollar category, and Icertis is in pole position to lead in this space," he added.

Greycroft Partners is a VC firm focused on investments in the internet and mobile markets. It has offices in New York and Los Angeles and has assets under management of $600 million. The firm has made over 100 investments since inception, including App Annie, BaubleBar, Braintree, Buddy Media, Collective, Huffington Post, JW Player, Klout and Maker Studios.

Of late, the private equity firm has been focused on inking VC deals coming in as the first institutional investor into companies doing Series A stake deals. "Some of these companies are experiencing non-linear growth. Our idea is to catch them early," Kabir Narang, managing director at Fidelity Growth Partners India, told Techcircle.in.

The portfolio of the PE firm consists of Trivitron Healthcare and Milk Mantra, among others. It typically invests between $10 million and $50 million. With its early-stage investment strategy, it has brought down the size of the investment.