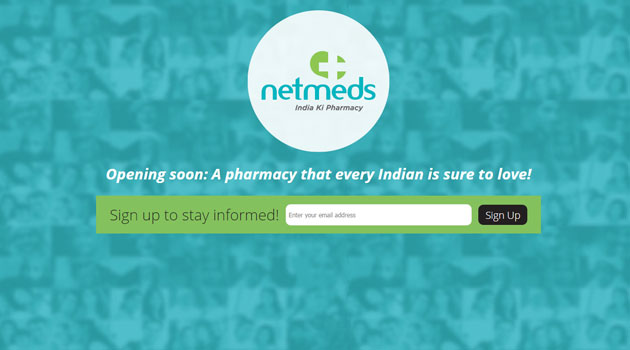 Netmeds' website currently not live and offers an option for users to sign up. The online store is expected to go online later this month.

The venture is launched by Chennai-based businessman Pradeep Dadha. Dadha's family ran Tamilnadu Dadha Pharmaceuticals Ltd, which was acquired and merged with Sun Pharmaceutical Industries Ltd in 1997. The founder of the firm S Mohanchand Dadha (also the father of Pradeep Dadha) now sits on the board of Sun Pharma, India's top drugmaker.

MAPE is co-investing with Pradeep Dadha putting in Rs 30 crore (under $5 million), according to a report in The Economic Times. The firm has committed to pump in another $5 million in the second round.

The newspaper said the website will sell prescription and over-the-counter (OTC) drugs, supplying over 15,000 stock keeping units (SKUs) across India from its warehouse in Chennai.

Another online pharmacy venture in the country is 1MG. Earlier run as HealthKartPlus, the property was spun off as a separate firm recently while raising $6 million (Rs 32 crore) from existing investors.

Earlier this year, it joined hands with Japan's Igarashi Electric Works Ltd to buy Blackstone's entire stake in privately held auto parts maker Agile Electric Sub Assembly Pvt Ltd. MAPE is understood to have committed a small sum in this much larger deal. Igarshi was a client of MAPE.

The drug retail market in the country is highly fragmented with standalone chemists dominating the show. Regulations also make it a tricky business, especially for prescription medicines which are to be sold only after the customer presents a doctor's prescription. 1MG asks customers to take an image of the prescription and upload it before allowing sale of the medicine through its portal.