Mobile shopping is the future, but can't let go of laptops yet 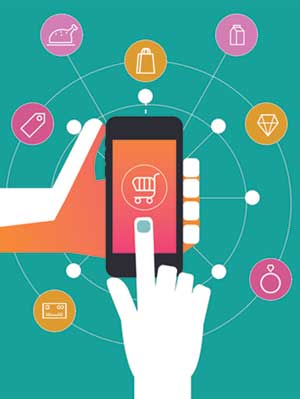 While the merits and demerits of going app-only continue to hog headlines, merchants selling on top e-commerce platforms seem to be cagey about junking their website presence. A cross section of sellers that techcircle.in spoke to believe that their order books would shrink by 10-15 per cent if any of the large e-tailers were to join the app-only brigade.

"The web shopping model should not be shut down as many buyers are not mobile-savvy yet. They still prefer to use computers or laptops to buy stuff online," proprietor of a Surat-based ethnic wear maker, who sells on both Flipkart and Snapdeal, says.

Another merchant, who deals in artificial jewellery on Flipkart and Amazon, pointed out that Flipkart's reported move to go app only could result in lower sales from tier two and tier three cities. "Mobile shopping is still a very urban phenomena," he added.

A Pune-based apparels maker says his company has been getting fewer orders from Myntra since May 15, which is when the Flipkart-owned fashion e-tailer turned into an app-only player for transactions. All three sellers mentioned above did not wish to be identified.

The debate over the app-only approach recently took an interesting turn with Snapdeal co-founder Kunal Bahl jumping into the discourse. In a recent interview to The Times of India, Bahl said that Myntra's app only move was the 'dumbest' and the 'most consumer-unfriendly idea.' Bahl added that 80 per cent of Snapdeal's users said in a recent survey that they wanted the PC site to remain. This is despite Snapdeal getting 75 per cent of its total orders through the mobile platform.

"Even though the actual transaction may happen on the mobile interface, people use multiple devices to look into a product and evaluate it before deciding to buy. The decision making process always involves a larger screen and hence going app-only could be a productive strategy for merchandising companies," he says.

Post Myntra, there was talk of Flipkart shutting down its website for transactions. This was to happen starting September 1. While the company continues to showcase its mobile-first approach, all indications are that the app-only strategy has been put on the backburner for the time being. The company is trying to evaluate the impact of such a move on big-ticket items such as furniture and appliances. If industry insiders are to be believed, the app-only move has been permanently scrapped. However, this could not be independently confirmed.

In a reply to a techcircle.in query, a Flipkart spokesperson said: "India is gradually transitioning from a mobile first to a mobile only country. At Flipkart, we have been following a mobile first approach and 70-75 per cent of our total traffic is already coming from our mobile app. We are constantly experimenting with various aspects of our service to create the best shopping experience for our users on our app. Meanwhile, we continue to offer both desktop as well as mobile option for our customers."

Recently, dating property Truly Madly joined the likes of quick service restaurant and delivery chain Faasos, fashion e-tailer Myntra and cabs aggregator Ola, all of whom have stopped transactions on their websites in favour of app only usage. The move made sense for these players. While Truly Madly saw 98 per cent usage on the mobile platform, Faasos' got over 90 per cent orders from the app. There is still some ambiguity on how the app-only move has shaped up at Myntra, which is said to generate over 90 per cent of traffic and 70 per cent orders from its mobile app.

Myntra CTO Shamik Sharma recently claimed that contrary to popular perception, Myntra's transition to the app-only mode is not hurting overall sales. However, he did not provide supporting statistics.

A report by The Economic Times in May suggested that Myntra has seen a 10 per cent decline in sales following the app only move. This could not be independently verified.

Industry watchers are of the opinion that the app only mode augurs well for providers of hyperlocal services and niche offerings.

"The app-only option works perfectly fine for services such as cabs and healthcare bookings. For e-commerce and merchandising giants, this may not be the right strategy," Singhal added.

Sanjay Mehta, an angel investor who has put money in over 40 startups, also shares similar views. "Yes, it makes sense for all on-demand services to be delivered through the mobile or app channel. People will love app-based engagements for logistics, food, media, medicines and media and entertainment types of services," he says.

Yet, venture capitalists believe that the mobile screen is the future of e-commerce. Eventually, consumer internet companies will have to put all their eggs in one basket.

"India had about two million mobile internet users in 2009 whereas now there are 200 million mobile users. During the same period, desktop internet users have only doubled to 40 million," says Alok Goel, former CEO of Freecharge and MD of private equity firm SAIF Partners. Investors have to take cognisance of the fast expanding mobile ecosystem and fine-tune their investment strategy accordingly.

"I am definitely open to investing in a mobile-only company with the right set of offerings. However, mere translation of the desktop website into the mobile app is not the right thing to do," Goel added.

Shailesh Vikram Singh, executive director at early stage investor SeedFund, believes that companies can be ahead of the curve by going mobile-only before rivals catch up. "When a startup takes the app-only route, the focus shifts on creating a great product and aiming for long term growth. If most of the internet traffic will move to the mobile platform in the next few years, why shouldn't companies take the plunge right away?" he asks.

"If the future lies in mobile, I'll put my money there," Singh concludes.