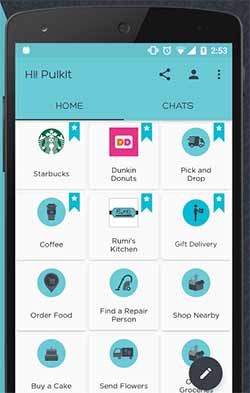 The startup will use the money raised to scale up operations and expand into newer geographies, it said in a press statement.

Joe Hukum was launched in July by former Healthkart employees Arihant Jain, Ajeet Kushwaha and Rahul Agarwal. It is a chat-based platform for order taking and fulfilment. Users can use the app for local shopping, pick and drop, movie/ event tickets, travel, restaurant reservations, bill payments and groceries besides other services. Joe Hukum is available on both iOS and Android platforms. The service can also be accessed through SMS.

It charges a convenience fee of five percent (of order value) on every transaction. The company has its own fleet of logistics personnel for delivering products. Currently, its services are fully operational in Delhi NCR and partially available in Bangalore. By March, Joe Hukum (run by GogetSpeedy Technologies Pvt Ltd) would also expand into Mumbai, Agarwal said.

Helpchat, which recently pivoted into a chat-based personal assistant app, had acquired Mumbai-based deals and discovery platform Niffler for an undisclosed amount in September.