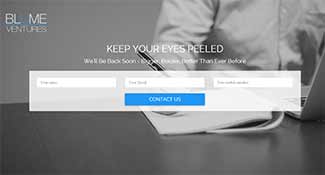 Mumbai-based seed-stage venture capital firm Blume Ventures said on Friday it has raised over $30 million for its second fund to mark the first fundraising milestone.

The fund has an overall target corpus of $60 million. Its second and final close for Fund II is expected next quarter.

The first close was led by ICONIQ Capital with participation from IIFL Wealth and the government's India Aspiration Fund, administered through Small Industries Development Bank of India, among others.

ICONIQ Capital is a global family office and merchant bank for a group of influential families.

Blume expects to make 35-45 investments from this second fund. "Blume will continue to invest in the domestic consumption and SME story as well as its belief in Indian engineering prowess," it said in a statement.

Blume had initiated fundraise for a $50 million new fund in early 2014 and decided to increase the size later. It had expected to close the fundraising in the first quarter of 2015 but got stretched.

Karthik B Reddy, managing partner, Blume Ventures, had told VCCircle the investment strategy for the new fund recently. "We are huge believers in domestic consumption but (it should be) mobile first. Consumer, small business and mobile first—that is the domestic story. But we are not afraid to invest in other areas such as SaaS, cross-border, deep technology, energy efficiency, robotics, medical devices, etc. About 40-45 per cent will be in such areas."

Blume's debut fund raised Rs 100 crore in 2011, or around $20 million then. It has so far funded about 75 startups such as MockBank, IDfy, GreyOrange, RailYatri, RoadRunnr, ReGlobe, Tookitaki, Purplle, Zopper and NowFloats.

Recently, Blume, along with other investors, backed Chillr, a peer-to-peer money transfer and recharge app. It also invested an undisclosed sum in a pre-Series A round into Gurgaon-based Zenatix Solutions Pvt Ltd, an Internet of Things (IoT)-based energy management startup.

Blume had good exits in the past year as four of its investee companies—TaxiForSure, Promptec, ZipDial and 1Click.io—got acquired by Ola, Havells, Twitter and FreshDesk, respectively.