Matchmaking app Aisle raises $183K in pre-Series A round 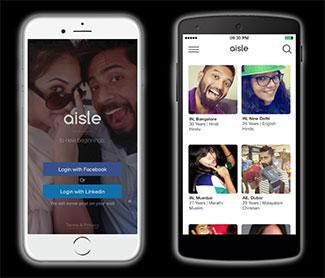 Bangalore-based startup Aisle Network Pvt Ltd that runs matchmaking app Aisle on iOS and Android, has raised Rs 1.25 crore ($183,000) in its pre-Series A round from TermSheet and ah! Ventures.

The company plans to primarily use the money for building team and partnerships.

Founded in 2014, Aisle claims around 500-800 registrations per day, and is active in 50 countries. The startup is led by Able Joseph, who is founder and CEO; Bivin Benny, director - user relations, and Razee Marikar, CTO. Benny has earlier worked with  Ogilvy & Mather and Flipkart while Marikar is an ex-Akamai executive.

Harshad Lahoti, founder and CEO of ah! Ventures, said, "Online dating has seen little innovation in the past couple of decades. Rarely do we see a dating app that is monetised from day one. When Aisle reached out to us, we instantly realised the potential of the product and the traction that it had gained."

Sonia Pradhan, TermSheet COO, said this is the second time it has facilitated a funding round for Aisle. TermSheet, led by Vivek Durai and Pradhan, is a platform that automates deal discovery, orchestration and closing. More than 450 investors have signed up for TermSheet since its launch in December 2014. It has closed eight seed investments and is currently closing its ninth deal with three more in the pipeline.

ah! Ventures has to date invested close to Rs 70 crore in over 22 startups spread across varied industries and domains, including Aisle. ah! Ventures is closing two more deals in the coming weeks.

The dating and matchmaking apps industry in India has been gaining momentum with many players entering the market and raising funding. Last month, Dil Mil, a matchmaking app for South Asian expatriates, raised an undisclosed amount in funding from one of the founders of US-based music streaming app Saavn (South Asian Audio Video Network).

In July, iCrushiFlush raised an undisclosed amount in pre-Series A funding from IDG Ventures.

Another venture in this space was Ignighter that was rebranded as StepOut and later acquired by Match.com.