Online jeweller BlueStone gets $30 mn from IIFL, Accel, others 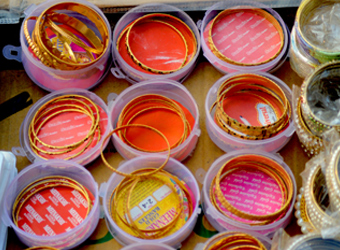 The new round comes exactly a year after BlueStone received $16 million in funding from IvyCap Ventures, Dragoneer and existing investors.

Gaurav Singh Kushwaha, co-founder and CEO of BlueStone, said the company will spend the money largely on products and designs in addition to powering up its marketing initiatives to strengthen the brand's presence.

"We are now targeting a four-fold increase in revenues to touch Rs 1,000 crore by 2018 and we want to achieve this goal in a profitable and sustainable manner," Kushwaha said.

BlueStone was founded by Vidya Nataraj and Kushwaha in mid-2011. It offers jewellery under various categories including earrings, rings, pendants, bangles, bracelets, necklaces and chains. The firm earlier used to source the merchandise from third-party manufacturers but now makes products itself.

In a recent interaction with TechCircle, Kushwaha had said the company processed about 5,500-7,000 orders a month, of which 70% were enabled through mobile traffic. Mobile accounted for nearly 40-45% of revenue, which it expected to grow to 65-70% in two years' time, he said at the time.

The company claims to offer about 5,000 jewellery designs on its platform and plans to scale to 30,000 designs in the next three years. Kushwaha said nearly 65% revenue comes from tier-1 cities and rest from smaller cities and towns. BlueStone delivers to 20,000 pin codes across India, in addition to the US, the UK, Canada and Australia.

The company mainly competes with Caratlane, Melorra, Velvetcase and Karatcase, besides horizontal e-commerce players Amazon, Flipkart and Snapdeal. These e-tailers operate in a segment that is a fraction of India's overall jewellery market but is growing much faster than the brick-and-mortar retailing.

BlueStone's main competitor is Caratlane. Titan, the Tata Group's watch and jewellery retailing firm, recently signed a pact to buy about 62% of CaratLane for Rs 357.24 crore ($53 million). This values the e-tailer around Rs 576 crore.