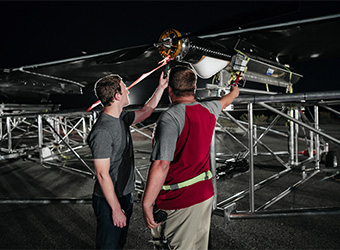 Aquila, Facebook's solar-powered internet-beaming drone, finally took flight. The drone is part of Facebook's project to provide internet access to the remote regions of the world. The flight happened in Yuma, Arizona on June 28.

Aquila is a lightweight, high altitude, unmanned aircraft designed to fly for three months at a time at an altitude of up to 60,000-90,000 feet above commercial air traffic plane. A Facebook blog post said the first flight was a low altitude one which lasted for about 96 minutes.

"We gathered a lot of data about our models and the aircraft structure. After two years of development, it was emotional to see Aquila actually get off the ground," Mark Zuckerberg, CEO, Facebook, said in a separate note on Facebook.

The aircraft has a wingspan wider than a Boeing 737, but at cruising speed it will consume only 5,000 watts — the same amount as three hair dryers or a high-end microwave.

Aquila will carry a communications payload that will use lasers to transfer data more than 10 times faster than existing systems. It will be able to aim its beams precisely enough to hit a dime more than 11 miles away while in motion.

When deployed, Aquila will be a part of a fleet of airplanes beaming internet signal to people within a 60 mile communications diameter for up to 90-days at a time. It will use free space laser communications as a mechanism for communicating between aircraft in the fleet and e-band technology to beam connectivity from the airplane to receivers on the ground.